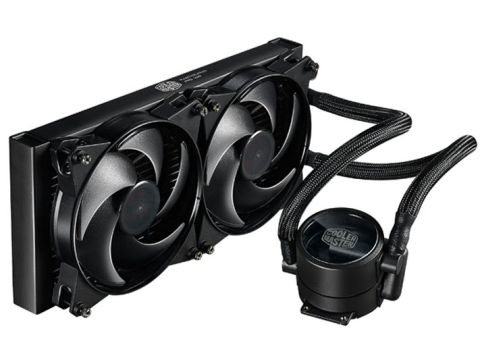 The MasterLiquid Pro 280 hangs tough with the Kraken X61 and Liquid Freezer 240, but the smaller and cheaper Frostflow 240L is nipping at the heels of higher-priced rivals.

The MasterLiquid Pro 280 has the fastest fans, and appears to have the fastest pump at over 9,000 RPM. Nobody heard any screaming noises from the pump, so the “Tach 2” speed shown assumes that the pump sends a tach signal four times per cycle.

The MasterLiquid Pro 280 is noisy, but then again so are two of its competitors. The Liquid Freezer 240 is by no means quiet, but its four slower fans produce fewer decibels of sound pressure on an A-weighted scale.

It looks like those seeking the best cooling-to-noise ratio should start stacking mid-speed fans, based on the Freezer 240 results. Many cases don’t have room to create a radiator sandwich however, and for those that do the ultimate acoustic efficiency would likely result from spending more money to add more fans to the larger radiators (and turning down the speeds).

The smaller 2x 120mm radiators typically cost less, with a price difference that exceeds the performance difference (in percentage terms). We aren’t using temporary discounts in this chart.

For deal seekers, the “killer value” could come from those temporary discounts we didn’t include. The MasterLiquid Pro 280 has recently been selling for as little as $100, and the Kraken X61 for as little as $120. The steeper MasterLiquid Pro 280 discount could make it the perfect part for a case that has a 2x140mm fan mount, but doesn’t have space for a stack of fans such as the Liquid Freezer 240 used to hit its performance marks. Of course, anyone who has room for both the wider radiator and two layers of fans is welcome to try both . . . on their own.