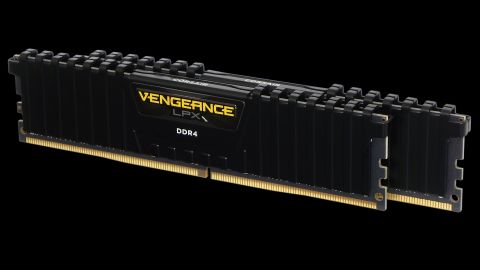 Intel’s H370 and B360 chipsets instruct its Core i5 (and above) processors to lock out any memory settings above DDR4-2666, which is particularly unfortunate in a market that’s moved way past that setting. DDR4-3200 is now mainstream within the enthusiast PC market, and is often treated as such by the memory sellers that cater to enthusiasts and gamers. Thus, the best way to get a top-performing brand new DDR4-2666 kit would be to dial the way-back machine to 2016 and get the high-performing kit from that time. Barring that, Corsair has a workaround.

Tight latency is a great way to improve memory performance, but the best way is to build with at least two ranks of memory ICs (chips) per channel. The difficulty getting there is that today’s integrated circuits are manufactured in 8Gb and 16Gb capacities, and it takes eight of these ICs to make a 64-bit rank. Looking at the mismatched lot numbers, it appears that Corsair dug through its old inventory and found enough mediocre 4Gb ICs to produce an entire run of 8GB dual-rank DDR4-2666 DIMMs for this kit.

Timings of 16-18-18-35 appear painfully slow in comparison to modern parts, but the dual-rank advantage is so great that we expect a rout with this kit. Unless you know where to find some old high end DDR4-2666, the only way we can think of to do better is to pony up for a low-latency 32GB kit, thereby securing two ranks per DIMM and tighter timings.

That said, poor timings aren’t this kit’s biggest issue. It lacks of any non-XMP settings above DDR4-2133 CAS 15. This specifically applies to the “don’t know” crowd: those who don’t know if their board even has an XMP setting, those who don’t know that their Core i3 (or below) top out at DDR4-2400, etc. So we’ll say it again: DDR4-2666 is for Core i5 and above; the limit is imposed by non-Z chipsets, and you’ll need a board that supports XMP to enable this kit’s DDR4-2666 profile.

The only surprise for today’s test is that prices have dropped this week for a few of the kits that started this series. Each kit retains its exclusive selling point, including the Ripjaws V’s low price, the HyperX Predator’s tight timings, the Viper’s RGB, and the Ballistix Sport’s broadened compatibility. But the price war gets a little hotter towards the end of our analysis.

One reason the Vengeance LPX’s rated timings are so terrible is that it isn’t using the classic overclocking trick of increased voltage to achieve these: Only the HyperX required the non-stock 1.35V setting so common among higher-frequency parts. Bumping the other kits up to 1.35V allowed each to support improved timings, and the Vengeance LPX’s gains are most noteworthy with a full three cycles shaved off CAS and four cycles off tRP and tRCD. Anyone who needs a primer for how timings work can scroll to the middle of our PC Memory 101 story.

Though it has far more latency than its single-rank rivals (see the second second chart), the Vengeance LPX starts off with a huge Sandra Memory Bandwidth advantage. And yes, we do expect that to show up in real-world tests. We should note that both tests are impacted by latency, but each uses different packet sizes to produce results that are latency-impacted by a greater or lesser degree.

Anyone who’s wondered whether EGO-engine games responded better to increased bandwidth or reduced latency need only compare these F1 2015 results to our above Sandra tests, keeping in mind what we said about packet sizes. he Vengeance LPX also wins on Metro Last Light Redux, if admittedly by a trivial amount.

The big surprise comes from 7-Zip, where the Vengeance LPX’s CAS 16 XMP timings perform slightly better than G.Skill’s CAS 15 and slightly worse than HyperX’s CAS 13. We again credit the dual-rank configuration. When all three kits are tweaked to CAS 13, the Vengeance LPX walks away with the victory.

The Vengeance LPX’s victory falters in value after recent price drops that put G.Skill in the frugal customer’s rigs. Two ranks per channel still outrank one in our performance tests, and those who simply cannot bring themselves to pay for 32GB to get dual-rank DIMMs have one clear choice in this Corsair Vengeance LPX kit. It’s the clear choice, that is, as long as your board support XMP.