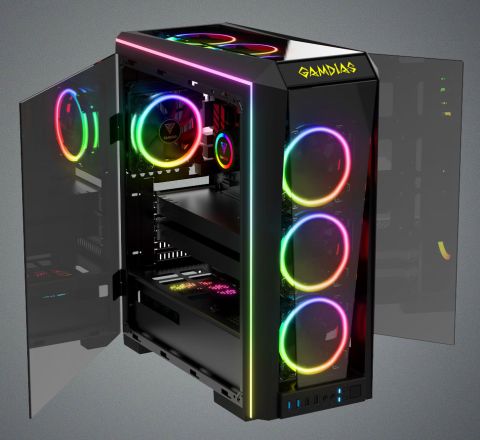 There are a total of 11 passthroughs for cable management: six large holes with rubber grommets in the motherboard tray, two smaller holes in the top of the PSU tunnel and three cable passthrough holes with rolled metal edges. The smaller holes at the upper left edge of the motherboard tray are specifically designed for routing fan cables and the ATX12V / EPS12V power cable.

The component compartment is extremely spacious and well laid out. A large hole behind the CPU socket area facilitates heatsink changes without removing the motherboard. The Talos P1A can support CPU coolers as tall as 170mm. A total of nine (seven standard plus two vertical) expansion slots can accommodate multi-GPU set-ups up to 380mm in length.

For a case of its size, we found it a bit surprising the Talos P1A can only accommodate two 3.5-inch hard drives and / or a total of four 2.5-inch SSDs (two convertible from the 3.5-inch drive racks) in the secondary compartment behind the motherboard tray.

It's also rather odd that the two dedicated SSD mounting locations actually block two of the cable passages in the motherboard tray.

We tested power supplies up to 200mm in length without any issues. That said, we recommend using a modular PSU because of the lack of space between the PSU and hard drive racks.

You can change the RGB effects using the RGB button on the front of the case. The built-in controller also allows RGB-capable motherboards to control fan lighting via software from manufacturers like Asus, ASRock, Gigabyte and MSI.

Mounting locations for up to seven fans include three 120mm or 140mm fans on both the front and top panels and a single 120mm in the rear. The Talos P1A ships with three Aelous RGB intake fans in the front but lacks an exhaust fan.

The rear mount supports 120mm radiators in single and dual-fan configurations, while the front and top support 280mm and / or 360mm max. A little advice for those of you planning to use a 360mm radiator: mount the radiator first, then install the fans from the bottom up.