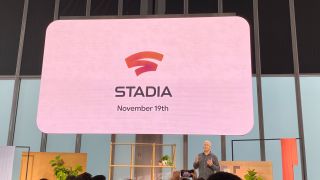 Google today announced that its Stadia game streaming platform would debut on November 19. The Stadia Founder's Edition bundle is expected to reach pre-order customers that day, too, for people who hopped on the Stadia bandwagon early.

Google announced Stadia in June after months of speculation. Google said at the time that the service would offer two tiers: a free Stadia Base subscription debuting in 2020 and the Stadia Pro subscription that's launching on November 19. Stadia Pro costs $10 per month, but Stadia Founder's Edition and Stadia Premier Edition pre-order customers will receive a three-month subscription as part of their purchase.

The Stadia Founder's Edition includes a Chromecast Ultra, limited-edition Night Blue controller, and three months of Stadia Pro to share with a friend. Google said pre-order customers would also receive Destiny 2: The Collection with their purchase. Games like Red Dead Redemption 2, Mortal Kombat 11, and others will also be available to play at launch but will require a separate (full-price) purchase rather than being bundled.

Google said in today's announcement that Stadia would be available starting at 9am PST on November 19. The company is still accepting pre-orders for its Stadia Founder's Edition and Stadia Premier Edition bundles on its online store. Stadia will also be available on "your TV, laptop, desktop, and select tablets and phones."