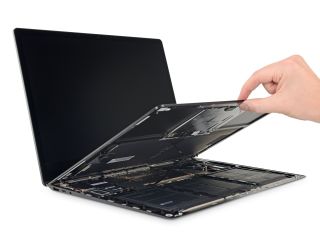 When Microsoft unveiled the Surface Laptop 3, it made a claim that it was easy to upgrade. At its unveiling, Surface head Panos Panay made it look as easy as pulling the deck and keyboard off the laptop. It ends up, thanks to a teardown from iFixit, that it's not quite that easy, but it's close.

The repair site gave the Surface Laptop 3 a repairability score of 5 out of 10, a massive jump from the first two Surface Laptops, which each received 0 points.

The basics are that you remove four Torx Plus screws located under the laptop's feet and then you can pry off the top cover, which is held to the rest of the chassis with magnets and a flex cable.

Unsurprisingly, the RAM is soldered down, but as Microsoft has previously explained, the SSD is replaceable. It's a 2230 M.2 NVMe drive, which is shorter than most M.2 SSDs currently on the market. But it's held down with a single Torx screw, so that's easy enough to swap.

But Microsoft has warned that the SSD is not user replaceable, and that only a "skilled technician" should swap out an SSD. That suggests that you may void your warranty by opening up the machine. But if you're handy and have the tools, it looks like adding a larger SSD wouldn't be too difficult.

For more, including detailed photos of the motherboard and information on removing more parts like the display, check out iFixit's full teardown.