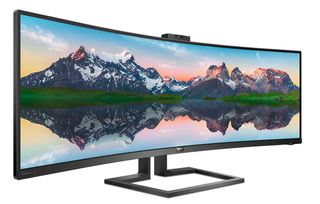 The panel itself has a 1800R curvature, and with its size has a pixel density of 93 PPI. It also packs a 4ms gray to gray response time, and has a 100Hz refresh rate and comes with adaptive sync to reduce stuttering and tearing. Therefore, although it appears to be aimed at an office environment, it will also be great for firing up a game now and then.

Color reproduction is quite alright too as it has a 10-bit panel with 95 percent DCI-P3 coverage, 123 percent of the sRGB color space and 91 percent of AdobeRGB. It has a Delta e of < 2 in sRGB mode. Lastly, the panel also comes with HDR400 support with a peak brightness of 450 nits, though it is also known that HDR400 is, of all HDR standards, hardly worth the name – so just treat this one like it’s a non-HDR display.

The display has a few more tricks too. Its stand support height and tilt adjusting, though you’re probably not surprised to hear that it doesn’t do portrait mode. The 439P9H also comes with a built-in USB-C docking station, which means you can use it to charge your laptop over USB-C. You’ll also be able to plug a few USB devices, Gigabit Ethernet and audio straight to the monitor, which it links through to your notebook, all over the one USB-C cable. It also has a built-in KVM switch that allows multiple devices to be displayed and controlled at the same time.