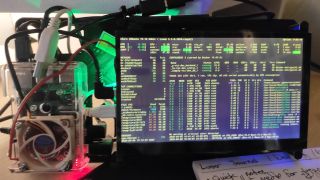 This Raspberry Pi project covers all of your on-the-go developer needs. Designed by a developer known as CodeF.red, it uses a Raspberry Pi 4 running Ubuntu to help manage his triple boot laptop rig. With the portable dev server, he can easily swap between the Windows, macOS and Linux.

The server is running Ubuntu off an NVME drive connected via USB (we have also detailed how to install Ubuntu on Raspberry Pi). The unit is controllable with a Bluetooth keyboard and also features a touchscreen. The maker also upgraded the Pi's cooling capabilities with a 5V Noctua fan with a super-low noise profile.

The dev server uses Docker and can be controlled via SSH. Since it uses Ubuntu, you can add plenty of additional tools, like Glances for cross-platform monitoring features.

Like many other Pi projects, the creator crafted this one using hardware already had on hand. CodeF.red said via Reddit that he considers the NVMe drive "overkill," especially since the performance is limited by the USB connection. But after removing the drive from an old Mac, it was gathering dust and needed to be put to use.

The touchscreen is also optional. It was chosen only to help click when using the Ubuntu desktop environment. You could easily use a mouse or keyboard instead.

This project is almost finished, but not quite. CodeF.red already has another hardware upgrade on the way—a battery UPS (uninterruptible power supply).