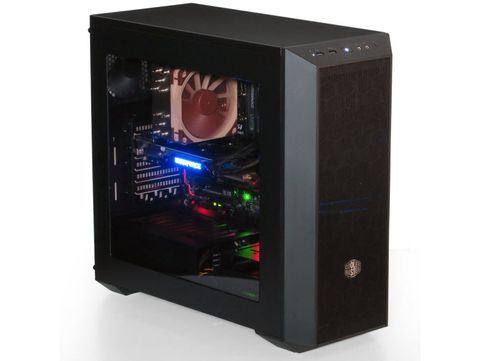 The MasterBox 5 from Cooler Master provides the best performance value we’ve seen in over a year.

For enthusiasts, the lower limit of acceptable case performance and quality used to come at around $80. There were certainly a few exceptions, such as a certain competitor's venerable model 300, but even that name was tarnished when the company released a substandard replacement; spending any more time in that discussion would distract from the subject of today’s review: Cooler Master’s MasterBox 5.

I’m going to let you in on a little secret that’s gotten me through several System Builder Marathon builds using cases I haven’t reviewed: A trained eye can see how well a case’s ventilation should work, and the lowest class of mid-quality mid-towers usually weighs 16 to 18 pounds. The MasterBox 5 uses steel and plastic thicknesses common among those $80 to $100 “gaming” cases, weighs 16.1 pounds, and the windowed version costs around $70. The photo, weight, and price show how Cooler Master nailed down the basic specs on this one, but what about the finer details?

Cheap cases don’t come with many front-panel ports, but Cooler Master was at least modern enough to include USB 3.0 even if the ports aren’t color coded that way (they’re not blue). The reset button is tiny to avoid confusion with the power button, which has an LED-lit power logo.

The back reveals seven expansion slots behind the motherboard, and a knock out for installing a break-out plate to the side (screw tab not included). Not immediately apparent is the lack of bars between expansion slots, which eases the installation of dual-slot and triple-slot graphics cards while somewhat weakening the back panel. The bottom slot cover is designed to hold cables.

A small dust filter that covers the power supply air inlet slides out from underneath the rear edge of the MasterBox 5’s bottom panel.

Front air filtration is a little trickier to access, since it’s attached to the back side of the front panel frame. You must first remove both side panels, since the frame and filter use flat catch tabs (barbs), which you must manually release from behind.

Cooler Master cites support for two 120mm or 140mm front fans, but the opening is large enough for a three-by-120mm radiator up to 420mm tall (including end caps, fill ports, and line fittings). There are even extra holes for the bottom screws of the third fan on top, so we added it to the chart (next page). The company similarly claims a single 2.5” tray, but that tray actually supports two drives.

The 3.5” trays also support 2.5” drives, but the 3.5” units benefit from silicon-damped locator pins. This is a balanced solution for users of solid-state 2.5” and mechanical 3.5” drives.

The lower cage can be re-positioned to provide extra radiator clearance, and the upper (2.5”) tray can be re-positioned to make room for up to two 5.25” external drives. Brackets for external drives must be purchased separately, along with a shorter mesh panel to reveal the opening, and the conversion leaves room for only two-by-120mm radiators (or 2x 140mm units with short end caps).

The MasterBox 5 has nearly 1.2” of space behind the motherboard tray for cables. A single screw releases the slide-out power supply cover to allow power supply installation from the opposite side.

With two specially designed self-centering standoffs installed at the factory, the MasterBox 5 installation kit includes the other seven standoffs needed to install an ATX motherboard, along with a pack of cable ties, several M3 and 6-32 mounting screws, fan mounting pins, a fan power adapter cable, and a bracket to use with your cable or lock.

Though EATX might appear a strange specification for a mid-tower, Cooler Master gets there by leaving drive bays out of the motherboard section and, almost ingeniously, not adding a step-in section at the front of the tray. The firm does not provide the extra standoffs for a 13” EATX board, but instead targets buyers of 10.6” to 10.7” oversized ATX boards that are often mislabeled as EATX for lack of a more-accurate form factor designation. Extra standoffs can be purchased by those few buyers who actually have a real EATX board, since that option is a requirement for the MasterBox 5 to carry the EATX label.

MORE: Cases in the News

MORE: Cases in the Forums