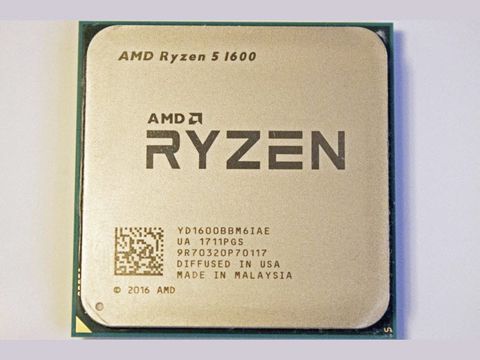 Futuremark's new VRMark test lets you gauge your system's suitability for use with the HTC Vive or Oculus Rift, even if you don't currently own an HMD. VRMark features both HMD and Desktop modes. Desktop mode works both with and without an HMD attached. If you do have one connected, software caps the frame rate at the HMD's refresh rate (90Hz for both the Vive and Rift), and Futuremark doesn't recommend wearing the HMD during the test. We conducted our tests in Desktop mode on a standard monitor, outputting the same resolution and view (for each eye) as an HMD, but without the 90 FPS cap.

The Orange Room test is based on the suggested system requirements for current-generation HTC Vive and Oculus Rift HMDs. Futuremark defines a passing score as anything above 109 FPS (for both tests), so all of these processors paired with a GeForce GTX 1080 are suitable for modern VR experiences.

The Blue Room metric performs a grueling 5K resolution benchmark that mimics the expected performance requirements for future VR devices. It's clear that we're butting up against a graphics bottleneck during the test.

The stock and overclocked Ryzen 5 1600X configurations unleash beastly performance during the DX12 physics workload. The 1600 also posts strong results that either beat or challenge the overclocked Core i5-7600K.

Once again, even after Futuremark's recent API test update, we note a reduction in multi-threaded DX11 draw call performance for the overclocked six-core Ryzen processors compared to their stock configurations.

Prev Page Overclocking & Test Setup Next Page AotS: Escalation & Battlefield 1
94 Comments Comment from the forums
Be In the Know