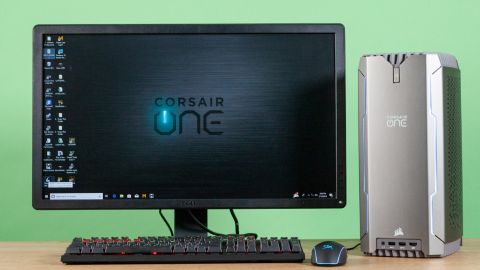 Content creation professionals and pro-sumers with little desk space, take note. If you need serious computing muscle for tasks like high-end media production, you’ll be hard-pressed to find a better option than Corsair’s top-end One Pro i180.

The system’s primary detractor -- apart from the high price -- is some noticeable coil whine coming from the graphics card. I’ll get into this more in the Performance section, but how annoying it is will vary by user, and where you put the system on your desk.

Let’s get this out of the way up front: The $4,999 price tag of the One Pro i180 is unquestionably high. As with most pre-built systems, you could save yourself some money by building your own. But comparable parts to this system, including 32GB of RAM, a 12-Core i9-9920X CPU, a liquid-cooled 2080 Ti, and a 960GB SSD plus a 2TB hard drive for storage, will run you about $4,000 on their own. And you’d have a hard time building a system that’s both as small and as quiet from a fan noise perspective as the One Pro i180.

As far as components go, the only potential issue we see for some professional users is the 32GB of RAM that ships with this system. The mini-ITX Asrock-made X299 motherboard that Corsair uses in the i180 has laptop-style SODIMM memory slots, rather than standard desktop RAM. There are four of them, so you could potentially upgrade to 64GB of RAM on your own. At the moment, that would cost you about $350 or more for a name-brand 64GB SODIMM kit. But if you can live with 32GB for a while, the price of memory seems to be trending downward.

The light pipes that run down the front of the system default to blue out of the box. But firing up the company’s pre-installed iCue software, you can customize the color of the eight total LEDs (four in each strip), or have them change based on temperature changes or what game you’re running.

I discovered the temperature feature at one point while briefly running the system with the top off (which houses the primary fan), investigating a coil whine issue (see below). A couple minutes into a gaming benchmark, the light pipes on the right side began blinking red, which helpfully prompted me to turn the system off and re-attach the top exhaust fan. A minute or so after rebooting, and the top fan spinning a bit faster than normal, the light pipe stopped blinking its alarm at me, and returned to its calming default blue.

External connectivity on the One Pro i180 covers the basics. But if you crave lots of USB ports, you might be disappointed.

Up front, you get a pair of USB 3.1 Gen 1 ports, along with a headset jack and an HDMI 2.0 port for connecting a VR headset.

Around back live four more USB 3.1 Gen 1 ports, a pair of USB 3.1 Gen 2 ports (one Type-A and one Type-C), as well as dual Ethernet jacks and the usual accoutrement of audio connectors.

The graphics card has a trio of DisplayPorts. Noticeably lacking here is the USB-C-shaped VirtualLink port, designed for future VR headsets, that ships on most RTX 2080 Ti graphics cards. That could be a detractor if you’re specifically buying this system for VR, but even then, there will almost certainly be adapters that will let you plug VirtualLink headsets into standard HDMI and USB ports.

Again, the port selection here is likely sufficient for most. But professional users with multiple external storage drives or other peripherals may find the eight total USB ports here limiting. Remember that you’ll lose two to a keyboard and mouse unless you’re using some kind of wireless set with a unifying receiver.

As with the One i160, getting into the system is a matter of pressing a button at the rear top of the system (note that you have to press this button with serious force) and popping off the top with its integrated fan. Once that’s done and you’ve set the top aside, removing four screws on the steel frame lets you open the side panels. You’ll want to be careful when doing so, though, as both panels are attached to radiators via fairly short tubes.

Looking at internal upgrade options, there’s a spare M.2 slot behind the motherboard, but you’d have to remove the whole board (which is more complicated than normal thanks to a couple of daughter boards) to do so.

Corsair says the AIO CPU cooler here is capable of handling up to 165 watts. So you could theoretically upgrade the CPU up to an 18-core i9-9980XE in the future. But the 12-core i9-9920X is seriously capable in its own right, as we’ll see shortly in our testing.

Corsair says the graphics card is also technically replaceable with an air-cooled card (using axial rather than blower-style cooling). The company says you can decouple the graphics cooling setup from the CPU cooler and install a different card (so long that it fits within the physical restraints of the case). But the bottom line is this system already comes well equipped with the best gaming-focused GPU that you can currently buy. If you’re looking for something more powerful, like a Titan RTX or a true workstation card like a Quadro, the One Pro i180 isn’t a good fit for you.

Despite its small size, the Corsair One Pro i180 is a seriously powerful PC, with its 24-thread i9 processor, RTX 2080 Ti graphics, 32GB of RAM and NVMe SSD. In fact, for many of our productivity tests, no other desktop we’ve tested in the last year or so could even come close.

The One i180 averaged 727MB per second in our 4.97GB file transfer test. That’s well above the 471MB per second category average.

On our Handbrake test, in which we use the program to transcode a 4K video to 1080p, the Corsair i180’s time of 4:52 was nearly two minutes ahead of the 6:44 category average, and 46 seconds ahead of its closest competitor, the excellent MSI Trident X.

As we expected going in, this system’s high-end desktop (HEDT) processor makes it a much-more-capable high-end productivity and media creation machine than the system with more mainstream CPUs. Even more impressive is the fact that the One Pro i180 never got exceedingly noisy during our tests, despite its small form factor and class-leading performance. We’ve seen plenty of larger, less-powerful machines kick out a lot more fan noise under heavy load.

Given what we already know about the top-end Nvidia RTX 2080 Ti that ships in both the One i160 we tested previously and the Pro i180 we’re looking at here, we expect gaming performance to be stellar.

I played through some of the Kadingir Sanctum boss sequence in Doom at 4K and Ultra settings and the frame rates hovered between 110 and 143  frames per second (fps). During that testing, the One Pro i180’s cooling system did spin up, but at no point did it get nearly as loud as we’d expect given the high-end hardware the company jammed into such a small space.

That’s no doubt in part due to the fact that most of the device’s heat is dissipated through the radiators on the sides. The 140mm fan in the top definitely exhausts heat, but since it isn’t doing the bulk of the cooling, it doesn’t need to spin as fast as you would think.

The system’s primary detractor -- apart from the high price -- is some noticeable coil whine coming from the graphics card. Coil whine, if you’re not familiar, is a varying sound generated by high-power electronics as electricity passes through power-regulating parts. These days it most commonly plagues high-end graphics cards, as is the case here: the pitch of the whine changes noticeably when running games, depending on the frame rate.

But at least in our review unit, the coil whine issue can be mitigated by placing the i180 to the right of where you’re sitting, so the offending graphics card is pointed away from you. Once the system’s top fan starts to spin up, and especially when playing game audio or music, it’s much easier to ignore.

The i180 only led the pack in one of our gaming tests, Hitman, where it tacked on an extra 4fps above the Corsair One i160 at 4K. In Shadow of the Tomb Raider, the i180 lagged a few fps behind the i160 at 4K, which was again its closest competitor.

In short, this underlines our assertion that those who care primarily about gaming should opt for the less-expensive i160. But if you want a system for doing serious work most of the time, but that can still handle gaming at high settings and 4K, the i180 delivers on that front while, again, producing a less fan noise than most high-end desktops two or three times its size.

The Corsair One i180 ships with two years of warranty coverage and lifetime 24/7 phone or online support. There’s very little in the way of pre-installed software. Aside from Windows 10 Home and the bloatware that comes with every Windows machine, you get the previously mentioned iCue software, which can be used to control both the lights as well as the system fans. And the company also includes PC Doctor for remotely diagnosing performance and / or hardware issues.

Obviously, a $4,999 desktop isn’t for everyone. And even if you like the design of the One Pro i180, if you’re primarily a gamer and/or you don’t need 12 cores of CPU muscle, you should opt for one of the lesser One models, which start at $2,999. But for those who need truly high-end GPU and CPU performance in a compact package with minimal fan noise, the Corsair One Pro i180 is the best option we’ve seen.

The one caveat is the coil whine we encountered, coming from the graphics card in our test unit. It will likely bother some more than others, and could be more or less pronounced from one unit to the next. So if you opt for this system, be sure to check the return policy just to be safe. But for me, placing the system a few feet from where we were sitting, and making sure the side with the graphics card was facing away from the monitor (which happens naturally if you place the tower on the right side of your desk), all but made the whine inaudible--especially when listening to music or playing a game.

Today's best Corsair One Pro i180 deals
CORSAIR ONE PRO i180 Compact...
CORSAIR
£4,599.99
View
We check over 130 million products every day for the best prices
Be In the Know