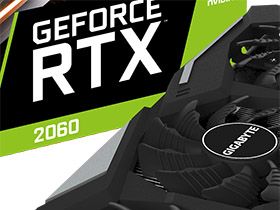 The software is set up to log the power consumption of graphics cards, storage devices, and CPUs. However, we’re only using the bricklets relevant to graphics card testing. Gigabyte's GeForce RTX 2060 Gaming OC Pro 6G gets all of its power from the PCIe slot and one eight-pin PCIe connector.

Time after time, we’ve seen graphics cards with semi-passive fan modes facilitate lower power consumption at idle than those with fans that spin continuously. Whereas Nvidia’s GeForce RTX 2060 Founders Edition uses more than 10W with nothing going on, the GeForce RTX 2060 Gaming OC Pro 6G ducks in under 8W.

Once Gigabyte’s card spins up, though, our Powenetics system measures significantly higher power use than the Founders Edition board.

Nvidia’s specifications call out a 160W thermal design power for GeForce RTX 2060. Its own implementation dutifully obeys that ceiling, averaging just over 158W through our Metro: Last Light benchmark sequence. But the GeForce RTX 2060 Gaming OC Pro 6G is on a looser leash: it pulls more than 180W during the same test, peaking just above 193W.

The line chart makes it clear where our benchmark breaks between loops. In between, power consumption isn’t as tightly limited as Nvidia’s Founders Edition card, suggesting that Gigabyte isn’t pulling clock rates or voltage through this gaming scenario to honor a specific power limit. We’ll try to confirm that on the next page when we graph those variables.

Along the way, Gigabyte does a good job of splitting current draw between the 16-lane PCI Express slot and a single eight-pin auxiliary power connector.

A bit of extra headroom allows FurMark to push average power consumption over 190W with peaks just under 200W.

Radeon RX Vega 56 was already running close to its limit through Metro: Last Light, so it doesn’t use much more power in FurMark. By comparison, Gigabyte’s GeForce RTX 2060 increases by more than 10W in FurMark, so it ends our measurement closer to AMD’s card than Nvidia’s own GeForce RTX 2060 Founders Edition. No wonder Gigabyte can hit and hold a more aggressive clock rate.

The GeForce RTX 2060 Gaming OC Pro 6G nevertheless keeps current draw over the PCIe slot limited to 4A. That’s well below the PCI-SIG’s 5.5A limit.

Prev Page Performance Results: 2560 x 1440 Next Page Temperatures and Fan Speeds
Be In the Know