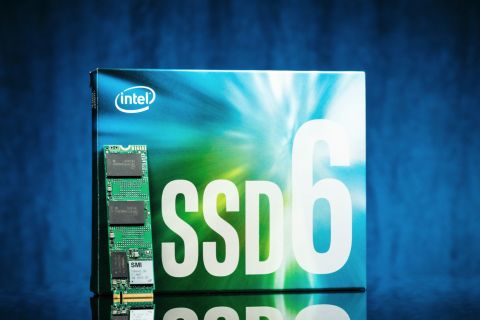 Verdict:  Like other capacities of the drive, the 2TB Intel SSD 660p lacks high endurance, and direct to QLC write speed is lackluster. But you get solid performance and efficiency under consumer-based workloads. Top things off, it’s significantly cheaper than the competition and often goes on sale, making it one of the best SSD values available.

Today, we pit the 2TB Intel SSD 660p against a few mainstream and high-end offerings. As the most expensive SSD in the bunch, we’ve added in Intel’s 1.5TB Optane SSD 905P, powered by Optane memory, it has the lowest latency profile in the group. Next up, we threw in the 1TB Samsung 970 Pro, which is the only SSD that utilizes 64L MLC V-NAND. Below it, Samsung 970 EVO Plus is a slightly cheaper alternative price per GB wise than the PRO, but it features Samsung’s 9xL 3D V-NAND as well as the same a penta-core “Phoenix” NVMe controller the PRO has.

As another mainstream alternative, we threw in HP’s 2TB SSD EX950, which has SMI’s SM2262EN NVMe controller and Micron 64L TLC NAND flash. And, built on Phison’s E12 controller and Toshiba’s BiCS3 64L TLC NAND flash we also added in the MyDigitalSSD BPX Pro. Finally, as reference, we threw in a 1TB Samsung 860 EVO SATA SSD and a 6TB WD Black HDD to see relative performance differences of these slower alternatives.

Intel’s SSD 660p’s game load performance is right in line with the rest of the group. Overall, it lands fifth place with the total load time of 19.88 seconds. This score bests the BPX Pro, SATA alternatives, and it even outperforms the HDD by nearly double.

Again, when copying files to itself, Intel’s SSD 660p outperforms the BPX Pro and SATA alternatives and scores fifth place. During the large file read back, however, the BPX Pro delivers a speed that is almost twice as fast and lands the Intel SSD 660p sixth place overall. Still, it easily reads at speeds that are significantly faster than any SATA SSD can deliver, and is six times faster than the 6TB WD Black HDD.

Intel’s SSD 660p lands sixth place in PCMark 8’s storage test. When it comes to application performance, the Intel SSD 660p is a significant improvement over any HDD. As well, its average bandwidth was double the Samsung 860 EVO’s and, overall, the performance was very similar to other mainstream NVMe alternatives. Although, it can’t touch the capability of Intel’s Optane 905p. That ultra-low latency and quite expensive memory offers up performance that is a tier above NAND.Trace Testing – SPECworkstation 3

Like in PCMark 8, Intel’s Optane takes the lead by quite a bit. But for entry-level use, the 660p offers enough performance for most. And again, even under such a heavy workload, the 660p outranks the Samsung 860 EVO and the WD Black HDD. If you are into any sort of professional application, higher-end SSDs offer improved performance and higher endurance, but this QLC based SSD still did pretty well. In SPECworkstation 3 the 2TB 660p scores sixth place and offers similar performance overall as the BPX Pro.

As the cheapest NVMe SSD of the bunch, the Intel SSD 660p offers the lowest sequential performance, up to 1.9 GBps read and write. Before the 8KB file size, the 660p holds up well, but after the high-end offerings, with their higher sequential performance, tend to leave it behind. Overall, Intel's drive offers significant performance gains over the SATA based alternatives.

For over two minutes of writing, Intel’s SSD 660p wrote over 275GB of data at a rate of 1.8 GBps. After that, the SSD’s write performance fell significantly, down to just 175 MBps on average. This gives the Intel SSD 660p great performance in applications that need high-speed write speeds as well as good performance when moving around most modest-sized files and folders. However, if you are writing well over 200GB of data to the SSD at once, write times can extend beyond that of the SATA based Samsung 860 EVO

Overall, the 660p’s efficiency is really good. It scores third place on the charts when copying our 50GB folder. Average and maximum power consumption is the lowest in the group, save for the SATA based 860 EVO. At idle it drops down to a measly 14mW to boot. Therefore, this SSD may be a good pick if you are looking to upgrade your laptop’s M.2 SSD, just as much as if you were to be throwing it into a desktop rig.