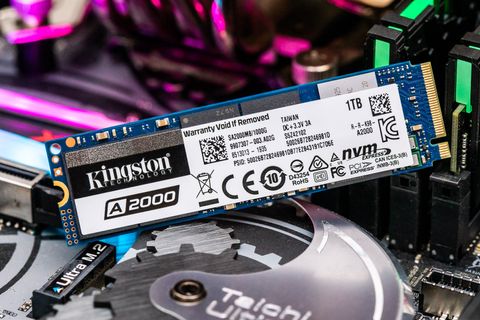 The Kingston A2000 delivers leading-edge game load performance. With a total load time of 18.80 seconds, Kingston’s A2000 took first place, leading even the Mushkin Pilot-E.

During our file transfer tests, the A2000 delivered similar performance to other entry-level NVMe SSDs. It averaged 501 MBps when copying the 50GB test folder, outperforming the HDD by five times. It also read back the 6.5GB file at 1.5 GBps, ranking fourth overall in read performance.

Kingston’s A2000 did amazingly well in PCMark 8. With a score of 5,103 points and an average bandwidth of 708 MBps, it scores second place, landing ever-so-slightly behind the Corsair Force MP510.

The Kingston A2000 completed the benchmark in just over 40 minutes and placed third overall. It scored more closely to the Pilot-E and Force MP510 than its entry-level competitors.  The drive certainly stands out if you're looking for consistent performance.

ATTO is a simple and free application that SSD vendors commonly use to assign sequential performance specifications to their products. It also gives us insight into how the device handles different file sizes. We tested at the default queue depth value of 4.

ATTO reaffirms the A2000’s official sequential performance specifications. The drive hit 2,200 MBps read, and actually broke the spec for write performance with a peak of 2,200 MBps.

As mentioned, the Kingston A2000 features a pSLC write cache. The drive can absorb about 165GB of writes before performance degrades from 2,200 MBps down to roughly 490 MBps.

It is also worth noting the very consistent write pattern after write performance degrades. This is significantly better than the performance the DRAMless Mushkin Helix-L. The A2000 also wrote significantly more data during the test, too.

The A2000 ranks in the middle of the pack when it comes to efficiency during the file transfer workload. The A2000's onboard DRAM causes the A2000 to have higher power consumption than the Helix-L, hence the lower efficiency score even though both averaged similar speeds.

When at idle, the A2000 consumed just 12mW when ASPM is enabled, and a little over 600mW when we disabled the feature. So, it is still a good upgrade choice for your next laptop or efficient small form factor PC.