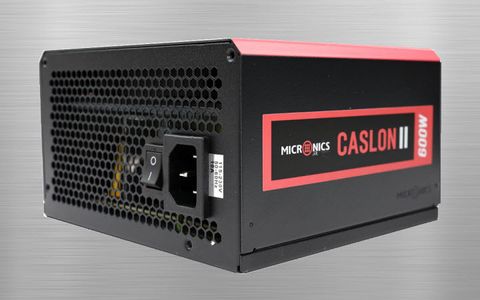 At a ~$50 price, the Caslon II 600W would earn a much better value score compared to its current $63 tag. The FDB fan, zero-wattage feature, and after-cooling mode are nice. But low efficiency and mediocre performance attributable to the outdated platform, along with native cables and incorrectly-configured protections are significant flaws.

Micronics is a Korean manufacturer that we haven't encountered before. Naturally, then, we're curious to check out what it has to offer. A quick look at Micronics' site shows that, aside from PSUs, it also sells cases, fans, liquid cooling products, sound bars, and all-in-one enclosures.

The company incorporates a couple of patented technologies into some of its power supplies. One is a cooling feature that keeps the fan spinning after shut-down to exhaust waste heat, similar to Enermax's HeatGuard. The other is designed to practically eliminate vampire power by deactivating the 5VSB rail.

The 600W Caslon II is what Micronics chose to send over for review. At the time this was written, Newegg had it in stock for $63. Budget-conscious builders must have snatched up that first batch, though. Now the listing simply says Not Available.

If you are looking for a highly efficient power supply, the Caslon II probably isn't for you. It's 80 PLUS Bronze- and ETA-Standard-certified, which is weird to see nowadays with 80 PLUS Gold PSUs selling for $20 to $30 more. But some folks don't care as much about efficiency, and simply want the most affordable model that covers their capacity needs. Still, we typically encourage readers to buy the most efficient power supply possible. Not only does this minimize your carbon footprint, but higher efficiency levels also reduce thermal load, facilitating lower fan speeds and less noise output.

In order to use the PSU the way it was designed, you have to attach its two-pin cable to the case's power connector, and a second PSU cable to the motherboard's power header. When you press the enclosure's power button for less than one second, a standby power cut-off mode is activated. If you hold it for more than two seconds, the power supply operates normally, meaning that its 5VSB rail remains active. Explained differently, the Caslon PSUs have a remotely-controlled power switch that can be activated/deactivated through the case's power button.

Again, Micronics' Caslon II 600W satisfies the 80 PLUS Bronze and ETA-S (82-85%) efficiency certifications. When it comes to noise, this PSU achieves a LAMBDA-S++ (30-35 dB[A]) rating. That's better than we expected, given its low overall efficiency.

Micronics claims that its fan uses a fluid dynamic bearing. We don't normally encounter those in this price range, so we'll have to crack open the Caslon II's fan to be sure.

Finally, this PSU's dimensions are super-compact, while it's under warranty for three years.

The single +12V rail cannot deliver the PSU's full power on its own, falling short by 60W. This is an indication that the platform lacks DC-DC converters for generating its minor rails.

Besides a standard EPS connector, the Caslon II also has a four-pin ATX12V connector. A PCIe cable featuring a couple of corresponding connectors is probably enough for a mid-range gaming PC. Meanwhile, the number of SATA and four-pin Molex connectors is sufficient.

Of course, we didn't expect to find any in-cable capacitors.

The EPS cable is long enough to avoid compatibility problems with large cases, and the distance between connectors is ideal at 15cm.

The Caslon II's cables are shown in the photos above.