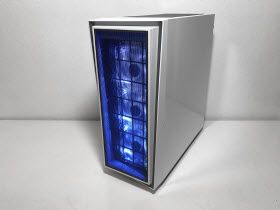 For comparison, we are pitting the SilverStone Redline RL06 against the Enermax Ostrog Lite, the Phanteks Eclipse P300 TG, the Riotoro CR500 TG, and the FSP CMT510. All are of similar size and features.

As previously stated, we were pleasantly surprised to find that this budget-friendly chassis comes equipped with three 120mm LED-lit intake fans. In theory, more fans should translate into better thermal performance, but, as we all know, that isn't always the case. When the Redline RL06 and its triple 120mm intake fans were put to the test, this chassis turned in some of the best numbers we've seen to date in a chassis of its size and class. Regardless of how hard we pushed our budget quad-core Core i5-7500 processor running at 3.8GHz, the airflow provided by this chassis was more than enough to keep temps in check.

As you can imagine, the sheer amount of unobstructed airflow and close proximity of the intake fans to our graphics card is a winning combination when it comes to heat dissipation. At 49°C over the ambient temperature, our results were better than any of the cases we used for comparison.

Oddly enough, given the sheer number of case fans, coupled with a mesh front panel, the acoustics were nowhere near as loud as one might expect.  Under full load, the noise output closely rivaled those of the Riotoro CR500 and the FSP CMT510, both of which featured one or more tempered-glass panels.

We determine acoustic efficiency, also referred to as "cooling-to-noise ratio," by averaging all five of our tests to determine a base value.

Undoubtedly, higher-end hardware and/or highly overclocked systems might not fare as well as our budget test system. But you can't deny the appeal of this level of performance given the price.

The SilverStone Redline RL06 is an excellent choice for performance enthusiasts on a budget, if you can overlook its few shortcomings. It might not have all the features of a premium chassis, but the thermal performance is top-notch, and it is priced to sell.