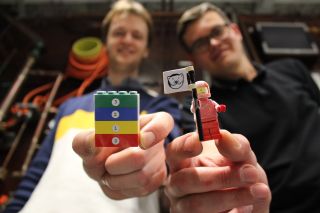 A major issue in the development of Quantum computers is finding affordable ways to produce thermal insulators, but it turns out there might be an unusual candidate to bring these costs down: Lego.

This was figured out by researchers from Lancaster University, who decided to try to figure out just how cold a Lego set could get. The findings were published in the journal Scientific Reports. To do this, they had one Lego mini figure dubbed the 'Cryonaut', as well as a stack of four ordinary 2x4 bricks. These were cooled using the dilution refrigerator at Lancaster University, which currently holds the record for being able to produce the coldest temperature in the world.

How cold is that? The fridge is capable of reaching a temperature as low as 1.6 millidegrees above absolute zero (-273.15 degrees Celsius, or -459.67 degrees Fahrenheit) which is is 2000 times colder than deep space. The Lego figures didn't quite reach this level of cold, but made it to 3.9 millidegrees above zero.

"Our results are significant because we found that the clamping arrangement between the Lego blocks causes the Lego structures to behave as an extremely good thermal insulator at cryogenic temperatures." said the team leader, Dr. Dmitry Zmeev. He added: “This is very desirable for construction materials used for the design of future scientific equipment like dilution refrigerators.”

Who knew that a Lego Cryonaut would make such discoveries?