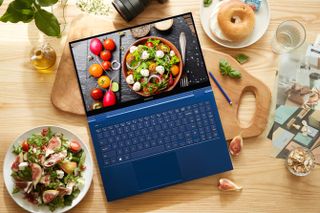 The Galaxy Book Flex uses a 10th Gen Intel Core processor with Iris Plus (Ice Lake) and is a 2-in-1 with an S-Pen stylus built in. The Galaxy Book Ion uses Comet Lake and is a clamshell made of magnesium. Both laptops have the first QLED displays in laptops, and both will be available in December. Neither machine’s price was immediately released.

The company has also announced plans for the Galaxy Book S, which it says it believes will be the first device on the market with Intel’s Lakefield processor, which uses Foveros 3D stacking and one large compute core and four smaller Tremont-based cores. We don’t know too much about this device, but it will feature LTE from Intel.

*Correction: This article previously stated that Lakefield uses four small Atom cores along with a large compute core. It uses Tremont cores. This has been corrected.