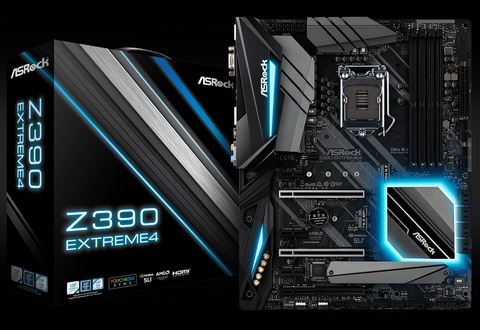 ASRock’s installation disc installed only App Shop and Restart to UEFI in addition to drivers, though we intentionally excluded its basic installation of Norton Security (trial), Google Chrome, and Google Toolbar. App Charger to enable quick-charge output on USB ports, A-Tuning overclocking, Polychrome RGB, and ASRock’s X-Fast LAN customized version of cFosSpeed all require download, and we cropped unrelated freeware out of the image.

ASRock’s automatic tuning algorithm is based on an existing overclock, but no overclocking profiles were available for our CPU, and we didn’t try running it based on a manual overclock (more on that in our firmware section). Manual software overclocking is applied to firmware and represents its full range of values. Under the System Info menu, we noticed that the board had automatically set 1.35V in lieu of our memory’s 1.20V default, and we confirmed its additional 18mV over-voltage with a voltmeter.

ASRock’s automatic tuning algorithm is based on an existing overclock, but no overclocking profiles were available for our Core i9-9900K CPU, and we didn’t try running it based on a manual overclock (more on that in our firmware section). Manual software overclocking is applied to firmware and represents its full range of values. Under the System Info menu, we noticed that the board had automatically set 1.35V in lieu of our memory’s 1.20V default, and we confirmed its additional 18mV over-voltage with a voltmeter.

ASRock Polychrome RGB’s Breath, Blink, and Static color modes can be synchronized with memory, but advanced patterns cannot. The program also addresses memory-specific patterns that are unavailable to onboard lighting, such as Rainbow and Meteor patterns.

Version P2.30 of the board's firmware opens to an Easy Mode GUI, where an XMP memory profile can be enabled, boot order can be set, and a fan profile can be chosen. A small “Tools” menu provides access to ASRock’s Instant Flash firmware update GUI, Internet Flash for downloading the latest firmware from ASRock servers, and FAN-Tastic Tuning advanced fan controls.

The CPU overclocking submenu offers all the multiplier and base clock range we could possibly use and even power settings to disable throttling. But we were unfortunately unable to achieve any overclock with our Core i9 CPU: Even at stock speed, the super-strenuous Prime95 small-FFTs stability test pushed past the voltage regulator’s thermal limit, and pointing a fan at the VRMs only gave us longer full-frequency duration at stock frequency.

The new Core i9 CPU doesn’t make memory overclocking any more stressful than in previous generations, and we’re happy to see that even this moderately-priced board can push our DDR4-2933 to DDR4-3866 with full stability (unlike the recently-tested Gigabyte Z390 Aorus Xtreme motherboard. The ASRock Z390 Extreme4 offers memory tweakers a broad range of timings and related settings to help them achieve the best-possible DRAM performance, and its DRAM Tweaker submenu provides the cues needed to get back on track if timings get pushed too far.

During our overclock attempts, we found that the CPU Load-Line Calibration setting of “Level 1” pushed our CPU core voltage by 10mV above our fixed setting, but that “Level 2” allowed it to droop by around 30mV. So, if our overclock had been stable, we would have chosen 1.290V CPU core with Level 1 Load-Line Calibration. Meanwhile, the board’s +18mV DRAM discrepancy made us chose its 1.335V setting to keep that voltage level below our 1.355V comparison ceiling.

Users who frequently dabble in firmware can set this board's entry GUI to Advanced Mode from the Advanced Menu of Advanced mode. Note, though, that this setting will get cleared if you’re forced to CLR_CMOS.

ASRock finally brings back UEFI-based RGB control within the Tool menu of Advanced mode, though the firmware version of this utility does not address memory lighting. Other tools include an outgoing email app for tech service, a tool to copy RAID drivers from the installation disc to a USB drive, Internet Flash for ROMs stored on USB, Internet Flash to download ROMs to USB, Secure Backup to copy UEFI between ROM integrated circuits (ICs), and Network Configuration to assist users on advanced networks who would like to use either of those internet-based utilities.

One of the nicer features of the Z390 Extreme4 (from a testing perspective, at least) is that its H/W monitor menu reports a realistic DRAM voltage. Manufacturers occasionally attempt to hide over-voltage to bolster memory stability without scaring users.

The H/W Monitor menu also includes a Fan Tuning algorithm designed to alter fan profiles to match a fan's minimum and maximum operational speed, plus custom settings for all five headers. Four of those headers can be switched from PWM to voltage-based control, but the main CPU fan header is PWM-only.

Prev Page Features and Layout Next Page How We Test