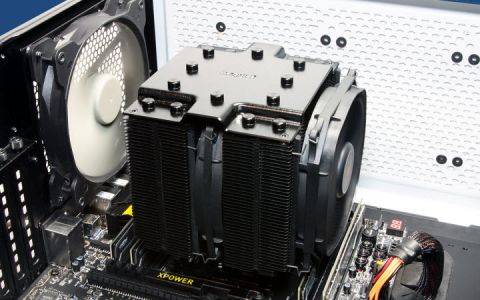 Our cooling comparisons are built upon data collected from standard testing methods in prior CPU-cooler reviews. We will be looking at the results from the be quiet! Dark Rock 4 Pro, along with the Dark Rock 3 Pro, the Cooler Master MasterAir MA610P, and the FSP Windale 6. All of these represent large tower coolers armed with six (or more) heatpipes. As usual, our Intel Core i7-5930K-based test system, overclocked to 4.2GHz with a vCore of 1.20V, provides six cores of thermal punishment.

Above is a clue: Fan speeds may hold the answer?

In the course of giving up a few degrees of cooling potential, the Dark Rock Pro 4 makes up for it by being the quietest cooler of the group. Indeed, we measured near-inaudible noise readings. One benefit to large heatpipe-based air coolers like this one is the sheer mass and volume of cooling fins they possess to help radiate thermal energy away from the CPU.

With great performance and undeniably hush-hush sound levels, the Dark Rock Pro 4 keeps all the bars on the good side of the chart above. The FSP Windale 6 is the only other cooler to maintain three positive values, while the half-speed performance of the Dark Rock Pro 3 shows cooling prowess and pin-drop silence can be made to co-exist.

The overall "Performance Value" metric, graphed above, allows us to work a pricing angle into these comparisons. The $90-MSRP cost of the Dark Rock Pro 3 and Pro 4 models is a big blow here, a reversal of their prior charting victories. Meanwhile, the FSP Windale 6 (priced 50% less) turned in closer-to-average scores, and it gains big ground on the other coolers due to its budget pricing. But it arguably doesn’t have the imposingly cool design and feature set of the others in the group.

The be quiet! Dark Rock Pro 4 impresses us, even though we did see a bit of a shake-up in cooling potential versus the prior (Dark Rock Pro 3) model. In turn, the newer model's noise levels are a positive trade-off. Also, consider that our punishing six-core test system pushes wattage loads greater than those of most overclocked quad-core CPUs. Most enthusiasts willing to pay good money for big air cooling can rest easy knowing that the performance they’re buying is still very much present in the newer Dark Rock Pro.

With the Dark Rock Pro 4's handsome design and impeccable build quality, be quiet! continues to impress with its stealthy flagship line of coolers. We would have liked to see cooling potential a bit closer to what we saw from the previous model. But with be quiet! using fans of dissimilar speeds, we’re happy to have the benefit of almost the same cooling ability, but at lower noise levels.