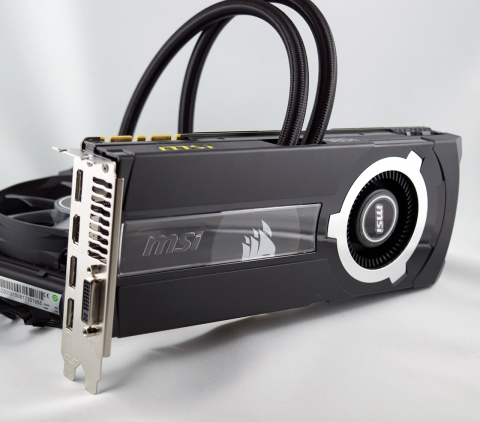 Going into this review, I expected Corsair's closed-loop cooler to maintain low core temperatures. But given an almost 200MHz overclock from the factory on what appeared to be a reference card, I didn't think we'd be seeing significant gains from our own tuning efforts.

In the end, Corsair's cooler on MSI's GeForce GTX 980 Ti proved very effective, and the familiar PCA design didn't appear to hold back performance in any way. It's a shame that Corsair won't be doing any more work in the graphics card space. Company spokesman Harry Butler explains that Corsair only wanted to sell high-end boards, but was unable to secure allocation of the GPUs unless it made cards up and down the entire line-up. Sadly, this will be the only Corsair-branded graphics card.
[Update March 18, 2016: After publishing our review, we received word from Corsair that there may actually be a future with Corsari branded graphics cards after all: "Don't count follow ups out just yet, said Harry Buttler, Senior Manager - Public Relations for Corsair. "While there are no plans for any more 9-series cards, we're always considering upcoming technologies."]

The H55 closed-loop cooler installed on Nvidia's GM200 proved to be a great asset. GPU Boost responds well to cool temperatures, as evidenced by the 1418MHz frequency we observed before even trying our hand at overclocking. Of course, from there, tuning the Hydro GFX was rewarding, to say the least. Its liquid cooler maintained low temperatures, even in the face of a voltage offset. We squeezed an extra 70MHz from the GPU's base clock, and the GDDR5 proved stable 400MHz (1600 GT/s) higher. Those higher GPU and memory clock rates give the Hydro GFX a tidy performance boost. In every one of our six game benchmarks, the overclocked Corsair card emerged as the fastest single-GPU card we've tested. Gigabyte's reign on top didn't last very long at all.

When I took the Hydro GFX out of its box, I was admittedly a little underwhelmed by its pedestrian reference-like appearance. But after playing with the card, I realized that all of Corsair's (and MSI's) effort went into what really counts: gaming performance. In stock form, we think there are better options available. But if you enjoy overclocking, this card is a stellar option. It runs quietly, even under heavy load and aggressively tweaked, it maintains modest temperatures and, if the gains we saw apply to all Hydro GFX boards, there is ample opportunity to procure a lot of extra performance.

I'm digging the Corsair Hydro GFX GeForce GTX 980 Ti more now than when the review began. It serves up better performance than I expected. But because it doesn't appear commercially available, we can't consider it much more than an exhibition. MSI's GeForce GTX 980 Ti Sea Hawk has a few more listings, but it's hard to come by as well. At the end of the day, you're best off choosing between any of the similar-performing, less expensive and more widely available GeForce GTX 980 Tis out there.

MORE: Best Graphics Cards For The MoneyMORE: All Graphics Content

Prev Page Overclocking, Temperature, Noise And Power
27 Comments Comment from the forums
Be In the Know