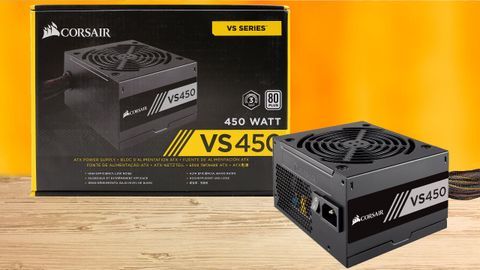 The load regulation at +12V doesn't look so good, compared to more expensive products. Nonetheless, it is within 2% so it is acceptable. The 5V rail is close to 1.1% and the 3.3V rail stays within 3%, with only the 5VSB going over 3%.

We didn't expect to measure such a long hold-up time in a budget PSU like the VS450. Kudos to Corsair for this! The power ok signal is also accurate.

The inrush currents are at normal levels, with both voltage inputs.

The PSU can handle increased temperatures for short periods at least. The fan has to work at high speeds though, to cope with the increased heat levels.

Only during the 10%, 110% and CL1 load tests, the PSU's efficiency drops below 80%. This looks good for an 80 PLUS white and Cybenetics ETA-S certified product. Moreover, because of the group regulated scheme on the secondary side, the performance in the CL1 and CL2 tests is bad. As you can see on the table above, the +12V and 5V rails have a hard time keeping their voltages within the specified, by the ATX spec, range.

In the following tests, we measure the Corsair VS450's efficiency at loads significantly lower than 10% of its maximum capacity (the lowest load the 80 PLUS standard measures). This is important for representing when a PC is idle with power-saving features turned on.

Under light loads, the registered efficiency levels are low.

Next, we plotted a chart showing the Corsair VS450’s efficiency at low loads, and loads from 10 to 110% of its maximum-rated capacity. The higher a PSU’s efficiency, the less energy goes wasted leading to a reduced carbon footprint, besides lower electricity bills.

Given its low efficiency certifications, we didn't have high expectations.

The 5VSB rail is highly efficient. This is a nice surprise!

Power Consumption In Idle and Standby

All results are obtained between an ambient temperature of 32 to 40 degrees Celsius (89.6 to 104 degrees Fahrenheit).

The fan profile gets aggressive under high operating temperatures, which is normal given this product's low temperature rating (30°C).

The fan profile is much better under normal operating temperatures. With higher than 300W loads the output noise is within the 35-40 dB(A) (comparative noise example: library) range.