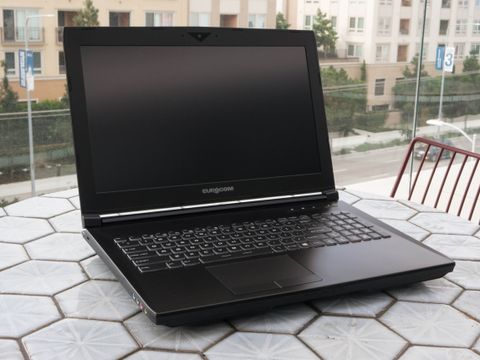 Equipped with a GTX 1080 GPU and a top of the line desktop-class Core i7-7700K CPU, the Eurocom Tornado F5 offers outstanding performance in an aesthetically conservative package, but it comes at a hefty price.

When shopping for a gaming laptop, it’s easy get lost among the offerings from big-name vendors like Asus, Gigabyte, Alienware, and MSI. But you can find companies like Eurocom unveiling interesting and powerful offerings, like the Tornado F5. Equipped with a desktop Intel Core i7-7700K processor and an Nvidia GeForce GTX 1080, the Tornado hopes to—ahem—blow away the high-end laptop competition.

Eurocom initially sent us a Tornado F5 unit a few months ago. The packaging was rather generic, and we found cosmetic damage on the unit during our initial inspection. The source of the damage wasn't clear, but it could have been that the original packaging's restrictive dimensions. The Tornado F5 is quite thick, and it didn't seem like the box it arrived in was the right one.

We notified Eurocom about this issue, and the company responded by sending us an unscathed unit with updated packaging. The new packaging is still rather plain, but it's much thicker and the interior foam lining is much more robust. If this is the final packaging, we doubt you'll have any issues. The box has a plastic handle for easy carrying. Inside, you'll find the unit wrapped in plastic lining and four foam slabs. You'll also find a separate accessories box containing the driver disc, quick start guide, and thermal pads on the top, an AC power cord on the right, and the 330W power adapter on the left. In the middle, you'll find two slabs of foam that appear to be placeholders for different accessories.

The top cover of the Tornado F5 features a black brushed-metal finish that will inevitably attract fingerprints, smudges, oils, and all sorts of debris unless you keep it clean. On the lip of the lid, the metal surface is interrupted by plastic bar. Otherwise, the cover is blank. There’s nothing wrong with this, but the lack of embellishments enhance the blemishes.

The brushed-metal surface finds its way inside, surrounding the area around the input devices, where the smudge issue is exacerbated. This is the trade-off. The surface is aesthetically appealing. The metal is also cool and crisp to the touch, which only entices you to touch it more. On the top right-hand corner there are three Quick Launch buttons that maximize the fan levels, turn the display off, and adjust the keyboard backlighting. To the right of the Quick Launch buttons you’ll find the power button.

Next to the four buttons are a group of small perforations cut across the brushed-metal surface, creating a speaker grille. The placement of these speakers is optimal, because the audio faces directly toward you, unobstructed. Many manufacturers place laptop speakers on the front lip, which gets blocked by your hands while typing or using the trackpad. We hope to see more laptop makers place speakers above the keyboard in the future.

The edges of the Tornado employ a different kind of plastic construction compared to the bezel. The front and side edges curve inward to make the Tornado appear thinner when viewed from the top. The side edges don’t have much in the way of aesthetics, whereas the front and rear edges are more ornate. In the front, you’ll find the status indicator LEDs in the center. Several ridges are indented forward on the left and right; in between these indentations is a contrasting smooth surface. On the back, you’ll find two large exhaust ports bearing the traditional gamer aesthetic, although the Tornado F5’s all-black coloration makes this more subtle than its more ostentatious contemporaries.

The edge surface is grainier, and upon initial inspection feels just as sturdy as the metal surfaces on the lid and surrounding the input devices. The damage we initially found was a large crack on the rear edge, right on top of the exhaust port, but considering how sturdy the construction feels, we believe that this may have been a fault in the packaging. Eurocom remedied this with updated packaging.

The hinge assembly is also made of plastic, but the surface is smooth, similar to the bezel. There are two small hinges, one on each side of the laptop, which provide the display with nearly 180° of motion, which is impressive for a laptop this large; typically, we would find this level of flexibility on thin-and-light laptops. The hinge does a decent job of keeping the display steady against bumps and shaking.

The bottom panel bears a similar aesthetic to the rear exhaust ports. It has just enough gamer flare to breathe much-needed life into the bland background, but it doesn’t do so in ridiculous fashion. A large grille is cut throughout the bottom to intake cold air. Six feet keep the Tornado F5 stable: four rubber feet on each of the corners, one rubber foot near the rear edge, and one plastic foot in the middle of the intake grille. On the left, you'll find a grille for the subwoofer, which complements the Tornado F5's already excellent speakers.

The construction is the same as the edges, meaning it features the same grainy surface. A moderate amount of pressure will flex the bottom panel. Perhaps if there weren’t as many intake grilles, or if the grilles were more spread out, the bottom panel’s rigidity wouldn’t be at risk, but the trade-off in rigidity would compromise cooling, so we'll call this a win.

On the left side, you’ll find inputs for headphone, microphone, S/PDIF, and line-in, as well as a lone Kensington lock on the far left. On the right side, you’ll find three USB 3.0 ports and a 6-in-1 card reader. Finally, the rear ports include an RJ-45 LAN port, Thunderbolt 3 over Type-C, HDMI 2.0, Mini DisplayPort 1.2, and a the DC power in. The Tornado F5 is “VR Ready,” meaning it has all the ports necessary to support either an HTC Vive or an Oculus Rift.

On the other hand, the trackpad leaves much to be desired. Tracking is fairly accurate, but the matte texture has a slight amount of surface drag when making fine movements. You’re better off using a gaming mouse. The trackpad isn’t clickable, and instead employs separate left and right click buttons below it. The buttons have a crisp, tactile response, but they don’t make up for the trackpad’s performance.

Accessing the interior is as easy as removing six screws and detaching the bottom panel. Immediately, you'll see the Tornado F5's hefty cooling solution, which takes up the entire back half of the system, and then some. If you want to access the i7-7700K and replace it with another Kaby Lake CPU, you can do so by removing the cooling solution. This requires removing three screws from each of the exhaust fans, four screws from the GPU heat sink, three from the heat pipes, and unfastening four large screws from the CPU heat sink (these screws cannot be totally removed). Thermal pads are attached to the CPU heat sink to cool the inductors and MOSFETs. Additionally, you can access the GPU by removing a hex-head screw.

Once the cooling solution is out of the way, you get a better view of the internals. There are two memory slots to the right of the CPU holding 16GB of DDR4-2400 memory. Below, you'll find the Killer Wireless AC-1535, which is responsible for the Tornado F5's networking capabilities. On the top right corner is the M.2 SSD slot, and on the top left corner is a 2.5" SATA slot, occupied by an HDD. Beneath the SATA slot is the 75.24Wh, 8-cell lithium ion battery.

To take advantage of the keyboard and Quick Launch functionality, you’ll have to visit Eurocom’s website and download the Hotkey folder under the driver page. Inside the folder, you’ll find various applications that will let you use the function keys and Quick Launch buttons. If these applications look familiar to you, it’s because they’re the same applications used on MSI’s gaming systems.

Included in the folder is the SCM (System Control Manager), and as you might’ve guessed, it functions as a central hub for the Tornado F5. From here you can adjust network settings, brightness and volume, ECO power profiles, and the display. There's a Shortcut Manager that lets you create and cycle through keyboard shortcut profiles. Sizing Options adjusts the size of objects and text on your screen. Silent Option adjusts the fan profile.

For cosmetic changes, you’ll need to install the KLM software. With it, you can choose your preferred RGB lighting setup from the following effects: Breathing slowly pulses the lights on and off; Audio makes the lights dance to whatever audio you’re playing; Wave adjusts the color from left to right in a wave effect; Gaming turns off the right side of the keyboard; Dual Color creates a breathe-like effect with lights pulsating between two different colors; Normal keeps the lights static. You can even set the keyboard to either Wave or Breathing when the Tornado F5 is asleep.