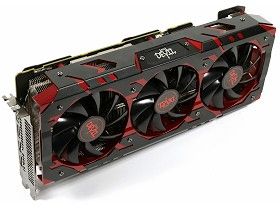 PowerColor's layout may seem a little different from AMD's reference PCB at first glance. However, the most important areas carry over almost 1:1. The second BIOS, lighting connector, and switches cause the board to be extended upwards a bit.

This implementation employs six power phases with doubling, resulting in 12 voltage converters for the VDDC and one phase for the memory (MVDD), just like AMD. In terms of components, PowerColor mostly mimics the AMD design.

The sources of other auxiliary voltages are also visible in our layout diagram.

Aside from the densely populated area opposite the GPU package, we also find the PWM controller, phase doublers, and SMD capacitors on the board's back side.

PowerColor employs a pair of eight-pin connectors to complement the PCIe slot's power delivery. Since our measurements show the motherboard slot only feeding this card 23-26W, those two connectors handle the rest.

As with AMD's reference design, the focus is on International Rectifier's IR35217, a dual-output multi-phase controller that provides six phases for the GPU and an additional phase for the memory. But again, there are 12 regulator circuits, not just six. This is a result of doubling, allowing the load from each phase to be distributed between two regulator circuits.

A total of six International Rectifier IR3598 multipliers on the back of the board are used to double the controller's phase count. Our infrared thermal measurements make it easy to see how the PWM controller shifts load back and forth between individual phases at idle to maximize efficiency, but also avoid overloading any one specific circuit.

Voltage conversion of the 12 circuits is performed by an International Rectifier IRF6811 on the high side and an IRF6894 on the low side, which also contains the required Schottky diode.

For the resonant filters in the VDDC, PowerColor relies on 190nH encapsulated ferrite coils, similar to AMD's reference card. The capping of extreme spikes on both external 12V supply connections is achieved through generous 560nH coils.

As mentioned, the memory's power is controlled by International Rectifier's IR35217 as well. One phase is fully sufficient for this card, as its HBM2 is less demanding. A CHL815 gate driver is placed on the board's back, while a NTMFD4C85N dual N-channel MOSFET on the front is used for voltage regulation. The co-packaged solution includes both high and low sides.

It’s interesting that PowerColor uses SMD capacitors instead of can caps. Their somewhat lower capacity is compensated for by simply running two of them in parallel on the back of the board. It does make sense to spread the hot-spots and make the thermal solution's job a little easier. Waste heat is kept to a minimum, as is the cost associated with cooling.

Creating the VDDCI isn’t a very difficult task. But it's an important one since this regulates the transition between the internal GPU and memory signal levels. It’s essentially the I/O bus voltage between the GPU and memory. A constant source for 0.9V is generated as well, along with a 1.8V source (TTL, GPU GPIO). These three voltage converters are equipped almost identically, relying on an MPS MPQ8633 synchronous step-down converter.

PowerColor places a switch up top to control its dual-BIOS functionality. The second chip is placed right next to that switch in the PCB's extended upper area.

ON Semiconductor's MC74HC238A demultiplexer drives the LED bar that shows the power supply’s load. It’s a fun gimmick, but does get annoying in a dark room at night due to its brightness. Fortunately, there's another switch you can use to turn the lights off entirely.