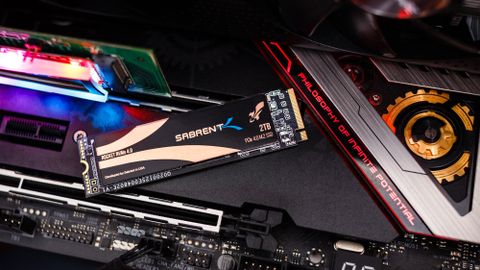 We put Sabrent’s Rocket NVMe 4.0 up against quite a few high-end competitors. Intel’s Optane SSD 905P is by far the most expensive, but offers the lowest random latency of the bunch and doesn’t slow down due to garbage collection. We also threw in the Samsung 970 Pro and Samsung 970 EVO Plus and Adata’s XPG SX8200 Pro, one of our favorite SSDs for the price.

Additionally, we threw in Patriot’s Viper VPR100, which utilizes Phison’s E12 NVMe controller and the Viper VP4100, which has a Phison E16 controller powering it. For reference, we also added in the Intel SSD 660p, featuring cheap QLC NAND flash, as well as Crucial’s MX500 and WD’s Black hard drive, both SATA based.

When it comes to moving around moderate-sized folders, the Sabrent Rocket NVMe 4.0 shows great performance. As well, it earns top ranks in the 100GB transfer and various large file read tests.

Trading blows with Viper’s VP4100, the other E16 contender and leading over any other NAND-based competition, Sabrent’s Rocket NVMe 4.0’s strong performance carries over to PCMark 10’s latest storage tests. Only the Intel Optane 905P can best the Phison-based drives in application requested tasks.

Completing SPECworkstation 3’s storage benchmark in just under 23 minutes, Sabrent’s Rocket NVMe 4.0 does quite well again. It is second only to the Intel Optane 905P and outperforms the Samsung SSDs as well as the Adata XPG SX8200 Pro. If you are currently using mechanical storage or even a SATA SSD for your professional workflow, this test shows why it may be time for an upgrade.

In ATTO, we tested Sabrent’s Rocket NVMe 4.0 at a QD of 1, representing most day to day file access at various block sizes. PCIe 3.0 SSDs tend to max out at about 3GBps in read/write, but with massive bandwidth available to it over the PCIe 4.0 bus, the Sabrent can hit higher highs. Reaching just under 5/4 GBps read/write, Sabrent’s Rocket NVMe 4.0 is capable of delivering over 15-18x the performance of the HDD.

Under sequential reads and writes, the Sabrent Rocket NVMe 4.0 maxes out at about 5.0/4.3 GBps and peak random performance tops the competition at just about 600,000/550,000 IOPS read/write. At a QD of 1, Intel’s Optane 905P is in a league of its own when it comes to random performance and Adata’s XPG SX8200 Pro and Samsung’s 970 Pro are just a hair more responsive, and Sabrent’s Rocket NVMe 3.0 is still very competitive.

Like other Phison E16-powered NVMe SSDs, the Rocket NVMe 4.0 features a write cache that absorbs inbound data at a very high-speed. But once it fills, performance temporarily degrades. Sabrent’s Rocket NVMe 4.0 wrote a bit less data than the Patriot Viper VP4100 we reviewed previously, reaching 669GB data written before its write performance tanked to about 540 MBps. Once you let it idle a bit, the cache will recover at a rate of about 16GB per 30 seconds.

Temperature-wise, even with the copper label, the 2TB model gets a bit hot under sustained writing. It can get into the 80-plus degrees Celsius range without enough airflow or motherboard heatsink and it will throttle. But, under most day to day use, temps will remain within the rated operating range.

With this high-performance controller and 2TB of NAND flash to manage, our sample draws a lot of power. In testing, Sabrent’s Rocket NVMe 4.0 peaked at 7.38W but averaged a bit under the Samsung 970s. With a similar score as the Patriot Viper VP4100, the Rocket NVMe 4.0  places fourth place in our efficiency test. Overall, that makes it about 17 times more efficient than an HDD during file copying and over 90 times more efficient at idle, sipping just 66mW at its lowest idles state on our test bench.