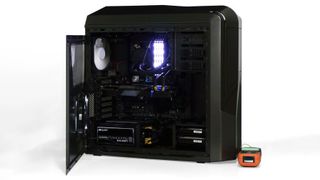 When we first went looking for budget X570 motherboards to review, MSI didn’t sample us any. So we decided to buy the company's sub-$200 MPG X570 Plus motherboard to see what it was capable of. We already knew what readers were saying about the board, and confirming those findings should have generated an excellent article on how it failed. But when the board didn’t fail our tests, we went ahead and wrote the review in a more-positive light than others.

After publishing our MPG X570 review, we got a lot of feedback from readers and our colleagues in the press, with legitimate concerns about our test methodology and equipment. If our colleagues, and even MSI's own testers, were seeing VRM overheating, why weren't we?

We appreciate this kind of feedback and take it very seriously, because testing is so important to what we do. Our senior editorial team reviewed the feedback and we decided to change our test methods: using new workloads, new temperature sensors and a more-demanding CPU.

Our original testbed was a mid-tower with a 2x120mm radiator and was based on the Cooler Master HAF XB.  We upgraded it last year with an Eisblock XPX CPU water block, fed by an Eisbecher D5 150mm Pump/Reservoir through a NexXxoS UT60 X-Flow 240mm radiator, all from Alphacool.

The goal of that upgrade was to support new HEDT processors without significantly increasing airflow over the voltage regulator compared to our previous Fractal Design S24 unit, but the thicker radiator required increased fanspeed to retain similar airflow. Since the new radiator was too thick to fit inside the case, we mounted it on the outside with the new EK Vardar fans in a less-efficient “pull” configuration. The result of this airflow restriction was that the new configuration had similar case airflow to the previous version.

Stepping Up To Ryzen 9

We began our X570 review series with a Ryzen 7, due to shortages of Ryzen 9 in the days leading up to the platform launch. Retaining it allowed our data to remain consistent, but understandably caused concerns about the lighter power requirement compared to Ryzen 9. Our first action was to buy a retail-boxed 3900X processor. To avoid any issue of voltage regulator thermal throttling, we set its limit to 125° in the motherboard’s firmware. This would allow us to see peak values beyond the default 102° to 105° throttling range.

While our original 3700X overclock reached 4.20 GHz at 1.375V with a peak voltage regulator temperature of approximately 90°, that peak dropped by one degree in our retest. The same voltage regulator runs almost one degree warmer when running the non-overclocked Ryzen 9 3900X. The ~89° temperature we measured isn’t a bad finishing point for the 3700X overclock, but it’s also not a great starting point for the 3900X at full load.

Stepping “Up” to Thermocouples

While we had researched the applicability of HWiNFO64 to our test board, many readers were concerned that the sensor it was reading might not be close enough to the hottest MOSFET to get an accurate number. For added perspective, here are the pertinent locations:

Though Amazon offers a variety of logging thermometers at lower prices, we opted for the Extech model SDL200, complete with four factory-calibrated Type-K thermocouple cables, for assured accuracy. As we only had four thermocouples to test eight phases, we attempted to address the hottest MOSFET of each phase pair: According to our IR meter, the most ideally placed thermistor is the one at the bottom.

Though our thermocouple occasionally read a higher temperature than the motherboard’s onboard thermistor, the overall impact was that the results from our first thermocouple reasonably tracked the onboard sensor. Yet there were still questions regarding the applicability of Prime95 to this test, so we moved on.