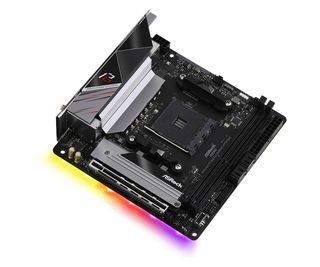 AMD’s B550 chipset motherboards are explicitly not compatible with first- and second-gen Ryzen chips, but according to a new series of tweets from known tech detective @momomo_us, the boards have been spotted running older Ryzen processors. The CPU-Z screenshots and results, which are in the CPU-Z database, seemingly confirm that someone got the older CPUs to run on a new MSI MAG B550.

Momomo_us posted screenshots that seemingly confirm an AMD Ryzen 3 2200G, AMD Ryzen 5 1600, and a Ryzen 5 3400G APU running on the B550 motherboard. All of these processors use AMD’s older Zen and Zen+ microarchitectures.

None of these processors are on the B550’s CPU support list, nor does the change log mention additional support for older processors. According to the B550’s packaging badge, it only officially supports 3rd generation Ryzen Matisse CPUs (Zen 2) as well as upcoming Renoir (Zen 2) and Vermeer CPUs (Zen 3).

We’re not sure why you would bother updating to a new motherboard to use an old processor, but it’s nice to know that you could, at least theoretically. However, it's highly likely that these tests were run by a motherboard vendor that could circumvent the compatibility restrictions for the sake of science, and it's unlikely that we would see B550 boards with unrestricted AM4 compatibility hit the market.