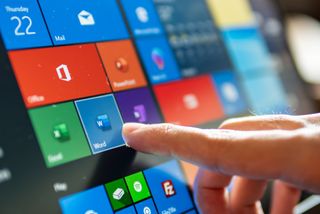 Windows 10 may be seeing a change to the start menu. Windows Latest reported yesterday that Microsoft plans to replace Live Tiles in the Start menu with a more traditional grid of application icons at some point in 2020 or 2021.

Live Tiles were developed to offer more at-a-glance information than the icon grids found on iOS and Android smartphones. That way people could view important details, like the weather forecast or a meeting time, right from the Start screen.

Live Tiles were a core part of the Windows Phone 7 and Windows 8 user interfaces. Even though Microsoft switched to a more traditional UI for Windows 10, the tiles remained in the Start menu, and they've stayed pretty consistent ever since.

But that could be about to change. Windows Latest said that "people familiar with the development told us that Microsoft is planning to replace live tiles with icons in a future update after Windows 10’s 20H2 release." (Which arrives later this year.)

Microsoft already removed Live Tiles from the Windows 10X operating system it developer for foldable devices and replaced them with standard icons. That didn't necessarily mean it planned to remove them from Windows 10 proper, though.

Or at least it didn't until Microsoft brought those icons to Windows 10 preview builds. The icons obviously clash with the rest of the current Start menu, so it makes sense that the tiles could be removed.