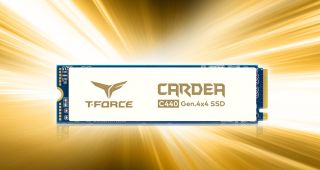 It's not every day that we'll quote a product's marketing description, but this one cracked us up. Today, we saw the unveiling of the Team Group Cardea Ceramic C440 SSDs, which the vendor claims is "beautiful and thin as a snowflake." Of course, that's an exaggeration, but we can confirm the new drives are at least white like a snowflake, thanks to its ceramic heatspreader, and Team Group's latest contenders for best SSDs in the PCIe 4.0 M.2 SSD market.

Operating on the PCIe 4.0 interface, these SSDs should be no slouches. They can read and write at up to 5,000 and 4,400 MBps, respectively, and come in 1TB and 2TB capacities. Team Group's clearly gunning for a high-capacity audience -- at least as far as most M.2 capacities are concerned.

Although Team Group didn't specify the controller its new drives use, given these speeds we reckon they're packing a Phison controller to enable the PCIe 4.0 support. There are hardly any alternatives on the market today.

Measuring 80mm long, the  Cardea Ceramic C440 series will fit in most M.2 slots found in desktops. They're also only 4.75mm thick, making the "thin as a snowflake" comparison more understandable. For added beauty, the drives feature an "Aerospace" ceramic heatspreader. This is supposed to improve heat dissipation by dissipating more watts and helps with the drives' lightweight build while fighting off electromagnetic interference.

Team Group hasn't revealed pricing yet. But as the SSDs follow the same recipe as many competing PCIe 4.0 SSDs, we reckon they'll be priced accordingly at around $200 for the 1TB model and twice that for the 2TB flavor.