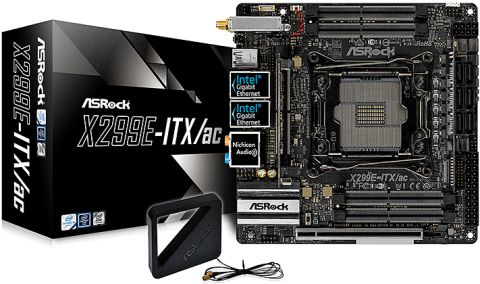 Additional cores create additional thermal and power loads that can push other hardware to its limits, yet the parts we’re hoping to push to the limit are all on the motherboards. Intel’s 10-core, 20-thread Core i9-7900X CPU is a great product for stressing the voltage regulators of various X299 motherboards, particularly under our full-AVX-load overclocking stability test.

Though the firm already sold dual-channel kits up to DDR4-3200, G.Skill produced a new quad-channel SO-DIMM kit specifically to address the enhanced capabilities of ASRock’s X299E-ITX/ac. Rated at DDR4-3800, its F4-3800C18Q-32GRS will compete directly against the company's DDR4-3866 long DIMMs that have long been used to evaluate ATX boards.

The tremendous heat produced by the Core i9-7900X required us to use nothing less than our award-winning Fractal Design Celsius S24 liquid cooling system sample. Getting its fans to blow sufficiently over each motherboard’s voltage regulator required additional design consideration: Of our leftover case review samples, Cooler Master’s HAF-XB had the best layout.

Concerned about our attempts to overclock using its tiny voltage regulator heat sink, ASRock sent along a BP-WBMASRX299EI monoblock from Bitspower. Using it would invalidate our thermal comparisons, so we reserved this RGB-lit part for an additional bonus test that will be discussed in our overclocking comparison. Because our Fractal Design Celsius S24’s pump is integrated into its CPU block, ASRock added the BP-LXAIO240-RGB Leviathan Xtreme All In One 240.

The X299E-ITX/ac is compared to the two most similarly-configured boards from the controller standpoint, the X299 Gaming Pro Carbon AC from MSI and ASRock's X299 Taichi. All models provide a range of overclock settings that exceeds the capabilities of our hardware, so this should be a solid test!