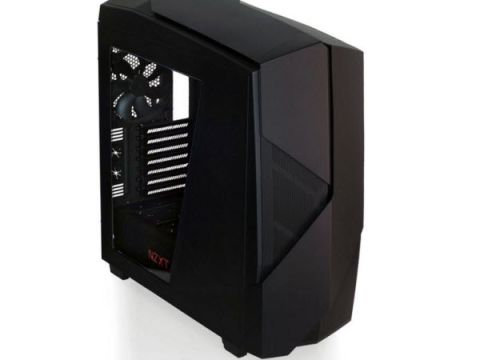 The NZXT Noctis 450 starts out as a quiet case with great features and good cooling, but becomes a heat monster after several hours of testing. It's one of two cases to exhibit this behavior in our lab. The thoughtful smart fan control design should work better with a large liquid cooling system than it did with our slightly-undersized CPU heat sink.

NZXT's Noctis 450 (aka N450) is no phantom, but aesthetic comparisons to the Phantom 410 are obvious. The naming isn't quite as clear, as the Noctis (latin for Night) is also available in white. Phantoms, as I understand them, can appear as anything from a shadow to a puff of white smoke. Perhaps NZXT is referring to the optimal viewing conditions for the N450's lighting?

Naming aside, the black version's shell invokes various powerful images, ranging from the pop-out spoilers of certain high-end cars to the flaps of a stealth jet or even Darth Vader's luggage. Regardless of whether your interests lean towards real-world technologies or sci-fi fantasies, the Noctis 450 should stir an opinion.

The front panel connector section is near the front of the top panel and tilts slightly towards the user, assuming that the PC is placed to your left. Two USB 3.0, two USB 2.0 and headphone jacks rest beside a lighted power button. There is no reset button.

A magnetic dust filter covers three 120mm fans behind the front panel, which can be replaced with two 140mm fans. The Noctis 450 manual indicates that a triple-120mm-fan or dual-140mm-fan radiator will fit here, but we didn't find room for the tanks of the triple-fan unit.

Two 2.5-inch drive trays reside above the power supply bay and lighted NZXT logo. Five more drive trays are found on the opposite side.

Radiator tank space is less crowded on the top panel, which is again rated for dual-140mm and triple-120mm radiators. Space above the motherboard opens from 1.8" at the case edge to 2.2" at the fan mounts to avoid any collisions with motherboard components, and the case even supports "sandwiching" fans by placing another set between the top of the steel chassis and the snap-away cover panel.

The N450 gets a little more interesting from this angle, as we can see the five 3.5-inch drive trays, the slide out power-supply dust filter, the removable power supply mounting bracket, the slotted fan mounts for positioning 120mm or 140mm single-fan radiators for optimal fitting clearance, and the dual round pass-through holes for external liquid cooling.

Each hard drive tray is completely removable, and all of these must be removed if the builder wants to use the front panel as a second large radiator mount. All five 3.5" trays provide rubber bushings for mechanical drive vibration damping, plus a second set of holes without bushings for 2.5" SSDs.

Remember that we teased "smart fan control" at the beginning of the review? The Noctis 450 isn't smart, but instead relies on the motherboard's "brains." A PWM-to-voltage fan control converter supports up to seven case fans, using the CPU fan's header signal to ramp these up and down based on the motherboard's CPU fan profile. The white connector feeds the PWM single through to the original CPU fan.

A small button in a top corner of the back panel controls case lighting, including a rear light above the I/O panel. The lighting controller is found on the back of the motherboard tray just forward of the button. Pushing it once turns the rear light off, pushing it again dims the ground-effects lighting, pressing it a third time disables the ground-effects, and pressing it a fourth time disables all lights.

The Noctis 450's installation kit includes a bundle of cable ties, in addition to its mostly-useful pictorial manual, screws and stand off.

Panel headers include USB 3.0, USB 2.0, HD-Audio and Power/LED. The case lighting and fan adapter connect to a single SATA power cable, and the fan controller also includes a signal input cable (for the CPU fan header) and fan power extender (for the CPU fan).

After removing the power supply mounting plate, the power supply slides in cables-first through the N450's rear panel. We installed the SATA SSD to one of the 2.5"-only trays inside the motherboard cavity.

N450 "ground effects" lighting is actually a far darker hue than shown: Such are the problems of capturing the light without nullifying the darkness.