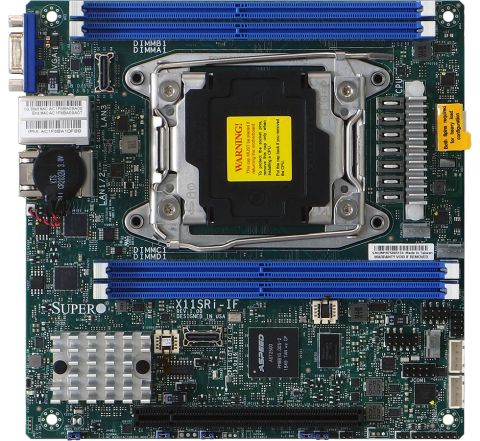 Designed for multiplatform servers, the single consumer function we can apply to the X11SRi-IF is as a secondary number-crunching board in dual-platform prosumer PCs. Excellent performance aligns it well to that niche within a niche, but US buyers will probably have to wait for a server component seller to carry it before finding a single-unit listing.

Update: As of Nov. 15, single units are still available only in UK.

The “more is better” philosophy of extreme computing has brought everything from CrossFire and SLI graphics arrays to workstation-class motherboards to the consumer PC market. So we were hardly surprised when companies started producing dual-motherboard cases (and even a desk) that lets users to install an ATX or EATX gaming platform on one side and a Mini-ITX number-cruncher or streaming PC on the other. But Supermicro has a thought for those of you who want real number crunching prowess on the Mini-ITX side: Why not go Xeon?

Born of a customer-exclusive design that Supermicro got permission to take public, the X11SRi-IF was originally intended to fit four complete configurations into a 2U chassis. For the consumer, that simply means that this board can support an LGA 2066 Xeon and four full-sized ECC registered DIMMs into the compact space meant to hold a Mini ITX consumer board.

The first thing that makes this board frustrating from a consumer standpoint:  You’ll need a Xeon and ECC DRAM simply to use the X11SRi-IF, as the board won’t even start with an HEDT CPU such as the Core i9-7900X. And attempting to pair that Xeon with a non-ECC desktop UDIMM returns an error that only proves that these parts are electrically compatible, but not firmware supported.

Supermicro sent a CPU that would compete directly against our Core i9-7900X, the Xeon W-2155, along with four p/n MTA36ASF4G72PZ-2G6H1RQK sticks of Micron’s 32GB ECC registered DDR4-2666. While we can’t yet match the memory capacity with a consumer kit, the workstation processor runs the same 3.30 GHz base frequency and 4.50 GHz top boost frequency as the Core i7-7900X. Heck, the two CPUs even have the same 10-core, 20-thread configuration and 13.75 MB of L3 cache.

Another thing that isn’t consumer friendly (even for “prosumer” workstations) is an I/O panel that has only two USB3 Gen1 ports. This, on a board that doesn’t even have any internal USB headers. On the other hand, prosumers who are good at networking can do nearly everything that normal people do over USB via one of the two Gigabit Ethernet ports. We said two ethernet ports because the third RJ-45 connector is for remote system management via IPMI (Intel’s “Intelligent Platform Management Interface”).

The lower corner does support an old-fashioned serial port but, apart from the Power/Reset/HDD LED/Power LED header, there are no front panel connections. Not even audio, because the board doesn’t have a codec. And if you’re using this with a graphics card, the paucity of USB ports and lack of additional PCIe slots means it’s not getting audio, unless you use the graphics card’s HDMI audio pass-through. At least there’s that odd option.

What the Supermicro board does do better than most consumer boards of this size is connect three fans, rather than two. Three should be considered the minimum since most compact performance cases have a front, rear, and CPU fan, but we’ll understand if you’re willing to use splitter cables.

Lo and behold, this board also has a single 512MB DDR4-2400 integrated circuit (IC) serving its AST2500 Server Management Processor, an ARM11-based part that includes 2d integrated graphics. You’ll find a jumper on the bottom edge of the board to disable that feature.

While there’s no visible SATA, the metal-shielded header seen in the image above supports both PCIe x4 and 4-port SATA cables. Compatible data cables include Supermicro’s CBL-SAST-0933 four-drive SATA and its CBL-SAST-0956 NVMe (using SFF-8639 for U.2). Supermicro also takes that unusual step of providing SATA power via the two white four-pin connectors seen on the X11SRi-IF’s forward edge, each of which supports its CBL-SAST-0886 dual-drive breakout cable.

Expanding outward, we find an identical NVMe cable header between the CPU socket and I/O panel VGA port. This header is NVMe only, allowing the board to support two of the firm’s CBL-SAST-0956 data cables.

A third hit to the X11SRi-IF’s suitability for desktop users comes from its misplaced upper rear standoff, which was mandated by the board’s DIMM placement. We had to remove the standoff from our test system to prevent shorts, and our case didn’t have an alternative hole to match the X11SRi-IF’s unusual configuration.

You may have noticed that the X11SRi-IF has no 24-pin connector. But it does have a power button header: For solo use, an ATX-style power supply with EPS12V cable must be used with its power-on pin shorted to a ground pin, and power savings with the system off but the power supply on relies upon the power supply’s idle features. However, what seems off-putting to builders of compact PCs might be a blessing to those who build two systems within a single case, as some of those cases have only one power supply mount.

The EPS12V header feeds a 6+1 phase voltage regulator rated at 165W continuously, in addition to all onboard components including the SATA power cable headers. Once again, what sounds like a great configuration for a specific type of server can also be a perfect match to dual-motherboard systems.

The X11SRi-IF’s back side supports a single 2280 M.2 SSD upon a low-profile (4mm-tall) connector, similar to the back-side slots of other Mini-ITX boards.

The X11SRi-IF doesn’t support any overclocking features, so we tossed in a few dozen screenshots of the things its firmware does support, many of which are remote management features.