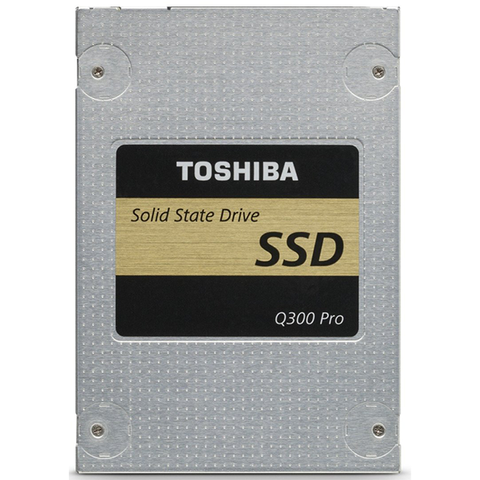 In this market, to sell products you need to either have the fastest SSD or offer the best value. No one wants to be the guy who spent too much and didn't get enough for it. The best SSD shouldn't have to wait for another model to enter end-of-life status to inherit a crown. Right now, Toshiba is just on the edge of delivering the best performance, but the price is too high for many to even give this model a chance.

Not long after last year's Flash Memory Summit, Toshiba released a pair of client-focused SSDs. The new Q300 and Q300 Pro follow a long line of underwhelming drives from a company that rarely warrants discussion due to misaligned pricing and poor marketing efforts. Today, we're focusing on the MLC-based Q300 Pro, but I want to touch on the TLC-based Q300 first to keep you up to speed with Toshiba's most recent efforts.

The Q300 appears to be a Toshiba-branded OCZ Trion 100 with the same Toshiba TC58NC1000 controller and Toshiba 128Gb 19nm TLC flash. That processor doesn't use Toshiba's Quad-Swing-By-Coding, an advanced form of ECC, so it's nearly identical to Phison's S10 controller. The Q300 is the only new Toshiba SSD to hit the 1TB mark before over-provisioning. And its price is higher than what you'd expect from an entry-level TLC-based SSD; the 480GB model currently sells for a wallet-busting $190 at Newegg.

The Q300 Pro follows the same design path as Toshiba's previous client-focused SSDs, the HG6 and Q-Series Pro. Like those other models, the Q300 Pro employs a DRAM-less design and odd dynamic SLC caching algorithm. It also struggles under lofty retail pricing.

You'll find the Q300 Pro in three capacities: 128GB, 256GB and the 512GB model we're testing today. Toshiba utilizes the TC358790 controller it designed in-house. That's the same processor used on the Q300 Pro's predecessor, the HG6. In fact, aside from new firmware that increases sequential and random write performance, we don't see too many other differences between them. Again, they both come armed with Toshiba A19 NAND and lack DRAM buffers.

There is that significantly better sequential and random write performance, though. Toshiba doesn't specify performance for each capacity, instead covering the whole family with an up-to rating. We call these "hero numbers" because lower-capacity models can't achieve them. You'll see up to 550 MB/s sequential read and 520 MB/s sequential write speeds. Random 4KB performance is claimed at 92,000 IOPS for reads and 63,000 IOPS for writes.

Along with QSBC ECC, the Q300 Pro uses Toshiba's Adaptive SLC technology. This has been around for some time now, and is used in both Toshiba and OCZ products. The Adaptive SLC does a good job of accelerating performance, but also produces a few abnormalities during synthetic testing.

The Q300 Pro is covered by a different warranty than the older HG6, too. Toshiba protects it with five-year coverage, two more years than the drive's predecessor. You also get a 7mm to 9.5mm adapter bracket and access to NTI's Echo software for cloning existing drives. Toshiba's marketing material says that an SSD Toolbox-like utility should have launched in December 2015, but we don't have any additional details.