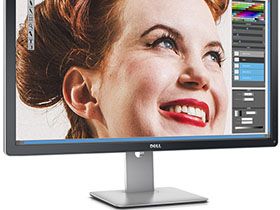 There’s no question that 3840x2160 is the hot resolution in display technology right now. Gone are the days when computer monitors and televisions followed separate development paths. It was barely two years ago that Sony showed us the first-ever production 4K television (an 84-inch panel selling for a cool $25,000, a price that still stands incidentally). It was only a matter of time before computer users began demanding that same experience on the desktop. We waited patiently. And as we saw already from stories like Gaming At 3840x2160: Is Your PC Ready For A 4K Display?, the first-generation panels are here. Slowly but surely, their wrinkles are being smoothed out, too.

At least thus far, the first screens in our lab are all 31.5-inch IGZO-based panels with a pixel density of 140 ppi and a recommended price of $3500. While they employ panels from Sharp, they do use different part numbers. Witness Dell’s UP3214Q, which not only introduces Ultra HD to the company's display portfolio, but also brings in the wider Adobe RGB 1998 color gamut.

Asus' PQ321Q (Asus PQ321Q 4K Monitor Review: Top-Shelf Ultra HD For $3500) proved to be very accurate in our tests, and was easily worth recommending for a professional’s toolbox. It is missing one key element, though: the Adobe RGB gamut. The difference comes from the panel each company uses. Asus leverages a Sharp-manufactured LD315R3LC1, while Dell goes with the LQ315D1LG9D. Both are IPS, rated at 350 cd/m2 brightness, and have native 10-bit color. The only difference is the gamut. Check out the specs below.

You can see from the average response time that this is not an ideal display for gaming. Our own Filippo L. Scognamiglio's The Myths Of Graphics Card Performance: Debunked, Part 1 helped illustrate the effects of that average response rating, and my tests bear this out as well. None of the first-generation panels have fast response, nor do they support a high refresh rate. Even if they did, the currently-available scaling hardware doesn’t support rates over 60 Hz. As it is, two scalers are needed to utilize the multi-stream feature of DisplayPort 1.2. The bandwidth is there in DisplayPort 1.2 and the forthcoming 1.3, as well as HDMI 2.0. But other components will have to be updated to process all of those pixels.

Neither Dell nor Asus is marketing their 4K displays to gamers. These are tools for photographers, artists, and programmers, pure and simple. To that end, accurate color, a sharp image, and solid build quality are the name of the game, rather than speed. Asus already sells a particularly accurate display, and Dell ups the ante with wide gamut support and a huge array of customization options. Not only can you choose between eight color modes, but there’s also a color management system, high and low RGB sliders, and factory-calibrated presets for both Adobe RGB and sRGB.

Without question, a lot of what you’re paying for is being first on your block with a 4K screen. Any major jump in resolution means manufacturing yields drop, and the cost of putting a tiled display together is undoubtedly high. But even with a few minor compromises, the PQ321Q and UP3214Q both exceed expectations for first-generation products. Build quality is excellent, and so is performance. Since Dell offers a little more in the way of features, though, it really should outpace the similarly-priced Asus.

Next Page Packaging, Physical Layout, And Accessories
42 Comments Comment from the forums
Be In the Know