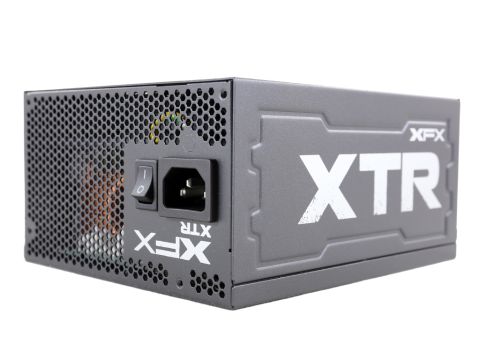 Using results from the previous page, we plotted a chart showing the XTR 850W's efficiency at low loads, and loads from 10 to 110 percent of its maximum-rated capacity.

Efficiency is quite high, easily keeping up with the Gold-rated 750W units under both light and normal loads. The only 850W PSU in our charts, the Corsair CS850M, stays clearly behind especially at light loads.

In the following tests, we measure the XTR 850W's efficiency at loads significantly lower than 10 percent of its maximum capacity (the lowest load the 80 PLUS standard measures). The loads we dialed were 20, 40, 60 and 80W. This is important for representing when a PC is idle, with power-saving features turned on.

Even with 20W load, efficiency stays above 70%. As you can see from the fan speed column, the fan operates in passive mode only during the first two tests and its minimum speed is set at 805 RPM, which translates to 32.5 dB(A) output noise. If you are after a dead silent PSU, this one probably won't cut it.

The 5VSB rail stands very well against other Gold-rated units in the 750W-850W range.

Power consumption at standby is very low; it doesn't exceed 0.15W even with 230V input.

The next chart shows the cooling fan's speed (again, in RPM) and output noise. We measured acoustics from one meter away, inside a small, custom-made anechoic chamber with internals completely covered in sound-proofing material (be quiet! Noise Absorber kit). Background noise inside the chamber was below 18 dB(A) during testing, and the results were obtained with the PSU operating at 38 °C (100.4 °F) to 49 °C (120.2 °F) ambient temperature.

Up to 160W load and under normal temperature conditions, the PSU's fan operates passively. Afterwards, it starts to spin briefly and then drops to passive mode again until the load exceeds 250W. For a wide range between 250W and 550W, the fan spins at its lowest speed (805 RPM) and exceeds 32 dB(A). Maximum noise is registered with >700W loads, and it falls within the 46-49 dB(A) range. In general, Seasonic could offer a more relaxed fan profile and not compromise reliability.

Prev Page Load Regulation, Hold-Up Time And Inrush Current Next Page Cross-Load Tests And Infrared Images
13 Comments Comment from the forums
Be In the Know