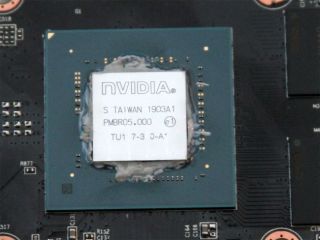 Just yesterday we figured out that Nvidia was also releasing a GeForce GTX 1650 Super, but we didn’t know the complete specifications yet. Low and behold, within just a day, VideoCardz posted what it claims are the full specifications.

We speculated that next to the memory upgrade from GDDR5 to GDDR6, the GTX 1650 Super would also be receiving a boost to its GPU specifications – and if VideoCardz’ report is to be believed (which historically does seem to be the case), we were right in thinking so. It’s also a very impressive bump: the GPU will go from carrying 896 cores in the GTX 1650 to an impressive 1280 CUDA cores in the GTX 1650 Super, and will also be bumped from a max boost clock of 1665 MHz to 1725 MHz. It will, however, keep its original 32 ROPs.

If these specs are to be believed, the GTX 1650 Super should perform noticeably better than the GTX 1650. Of course, it can certainly use this upgrade, as the original GTX 1650 didn't do so great in our review.

The GTX 1650 was not quite so great at pushing smooth gaming at 1080p, and also didn’t have the latest NVENC encoding hardware. The latter has reportedly also been updated to the Turing NVENC encoder, and with regards to performance, we reckon that the increase in memory and GPU performance should definitely help the card work better as a 1080p gaming card.

That being said, much like the higher-end Super cards that kept the same price or received a price cut, and the GTX 1660 Super is expected to only see a $10 price increase over its non-Super counterpart. The purported upgrade to the GTX 1650 Super is of enough significance that I reckon we will be seeing a higher increase in MSRP than just $10.

If you're in the market for a 1080p graphics card around the $160 to $220 price point, you should wait to see what's coming before making a purchase decision. Nvidia not only has the GTX 1650 Super coming, but also the GTX 1660 Super, and AMD is also expected to release its RX 5500 graphics card soon.

Only time will tell. The expected reveal date for the GTX 1650 Super remains November 22nd, so sit tight for more.