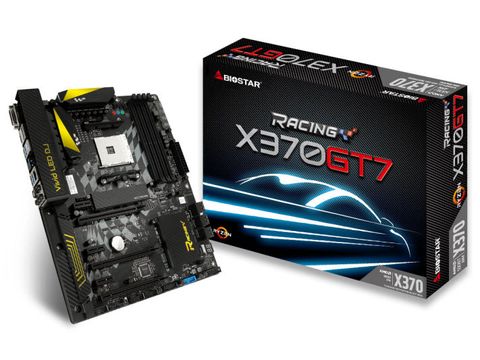 Let's run through some other features and the software. FLY.net is Biostar’s attempt at optimizing network traffic without licensing the Killer branded solutions from Rivet. By running FLY.net, applications can be given priority automatically through the program, or you can define how to apply your precious bandwidth resources. For instance, streaming a Battlegrounds match to Twitch at 770 Kb/s was throttling my Netflix window, but when I swapped the priority to “Browser” the quality of Netflix noticeably increased. If more thorough analysis is desired, let us know in the comments section.

The Racing GT app is also enabled for the GT7 and proides access to the Vivid LED DJ interface through the operating system. Permanent modes kept the LED portions of the board lit with the color, while breathing provided a fade to black effect that was similar to that of our Trident-Z memory. The shine effect sounds appealing in theory, but when we applied it through the tool it just looked like it strobed on and off like something was broken.

Though not entirely new, the Lightening Charger design supports QC2.0 and Apple output specifications of 12V/1.5A and 5V/2.4A respectively. This design is also compliant with the BC1.2 protocol.

The GT7 also includes Infineon’s PowIRstage IC, which is reported to increase response time within the voltage regulator circuit, reduce regulator temperature, and provide up to 60A of power delivery from each phase. We find it interesting that the marketing material specifically provides an accurate part number for these components, so if you are into that sort of thing, follow the link. With an 8+4 phase regulator design, the GT7 is on par with other offerings in this AM4 segment.

At the time of this writing, Biostar is bundling in a free World of Tanks premium account. Don’t be fooled by NewEgg; there was once a package that offered a bundled SSD M.2 drive with the motherboard, but that is not the package being shown today. (Editor's Note: One is included in the Biostar Z270GT9 we recently reviewed.)

The racing theme continues into the UEFI with the checkered flag residing at the bottom of the main viewing area. To the left, tachometers represent both the CPU and memory speed with voltages shown below their respective operating frequencies.

We like that the high-level health status is shown throughout the menus without eating up too much space and saving us the drive through several different menus. The bottom edge of the screen shows the main menu components.

Just as with ASRock samples, Biostar enables many of the extremely low-level Ryzen options through the UEFI, particularly the CBS, promontory, and memory customization options.

Smart Fan Control lets the UEFI control the fans with 4-pin PWM. After calibrating the fans, start and sensitivity values are updated and you can set them to aggressive, quiet, or manual fan modes.

The O.N.E. menu option is where we find our overclocking settings and options for Vivid LED control. For voltage control, you can select auto mode to “set it and forget it” or enable override or adaptive mode. Override lets you set specific voltage points, and adaptive mode allows for a plus or minus voltage bias to be applied from nominal values.

Override works best for our CPU core voltage, since we know the maximum we want to use. SOC voltage is set at adaptive mode so we can increase the voltage slightly without knowing what nominal is.

After doing some Googling, we determine that overclocking is enabled through the AMD Pstate Configuration menu where we must define the specific FID hex code that corresponds to our desired frequency. Each increment in hex increases the frequency by 25 MHz. Though not advised, users can also bypass the voltage specified for the module and increase it in 6.25mV steps by reducing the VID code by 1 hex increment, with a maximum setting of 1.55V.

You can overclock memory in two separate ways: either through enabling the XMP profile or selecting the appropriate memory frequency from the table. Both options worked for us for maximum memory bandwidth. Timings are tunable through the DRAM Timing menu if maximum tweaking is desired.

Load line settings between level 1 and 6 are available for overclockers, but Biostar suggests disabling the load line altogether to reduce voltage oscillation on the supplies and reducing the impact of Vdroop events. I do not like running without load lines, but for the sake of this review that’s what I ended up using. (Editor’s Note: We’ve seen past samples where Biostar’s “VCore LoadLine: Disabled” functions similarly to other manufacturer’s “LoadLine Compensation: Enabled.”)