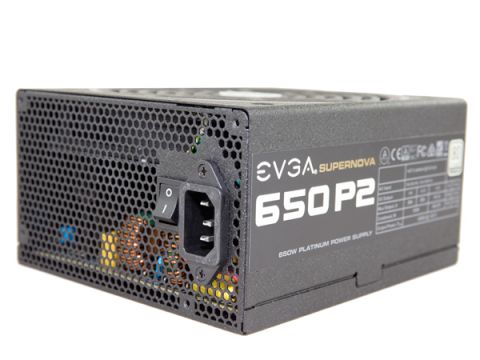 Using the results from the previous page, we plotted a chart showing the EVGA SuperNOVA 650 P2 efficiency at low loads, and loads from 10 to 110 percent of the PSU's maximum-rated capacity.

The only PSU that meets the efficiency of the 650 P2 is the Seasonic fanless unit, however at light loads the EVGA PSU manages to take the lead with a notable difference. In general, the 650 P2 is highly efficient under both light and normal loads.

In the following tests, we measure the efficiency of the EVGA SuperNOVA 650 P2 at loads significantly lower than 10 percent of the device's maximum capacity (the lowest load the 80 PLUS standard measures). The loads we dialed were 20, 40, 60 and 80W. This is important for representing when a PC is idle, with power-saving features turned on.

The efficiency levels in these low load tests are jaw-dropping. In three out of the four tests, the PSU easily passed the 80 percent mark and during the last test it achieved over 88 percent efficiency. On top of that, the unit operated in passive mode and featured a very cold operation due to its minimal heat dissipation. We had to activate the thermal element inside our hot-box for quite a long time in order to apply the necessarily high ambient temperatures for our test to complete.

Given the overall high performance that the 650 P2 achieved, we expected a more efficient 5VSB rail. The 5VSB rail isn't bad per se, but it doesn't match the rest of the platform's performance. Super Flower should consider upgrading its 5VSB circuit in future high-end platforms, we think.

Phantom power is quite low with both voltage inputs that we applied.

The first chart below illustrates the cooling fan's speed (in RPM), and the delta between input and output temperature. The results were obtained at 35 °C (95 °F) to 45 °C (114.8 °F) ambient temperature.

The next chart shows the cooling fan's speed (again, in RPM) and output noise. We measured acoustics from one meter away inside of a small, custom-made anechoic chamber with internals completely covered in sound-proofing material (be quiet! Noise Absorber kit). Background noise inside the chamber was below 18 dB(A) during testing, and the results were obtained with the PSU operating at 35 °C (95 °F) to 46 °C (114.8 °F) ambient temperature.

As you can see from the above graph, this PSU is almost exclusively silent; its noise output is actually closer to that of a passive unit. If you want to build the quietest possible system and don't want to rely on a fanless supply, EVGA's SuperNOVA 650 P2 should be your choice.