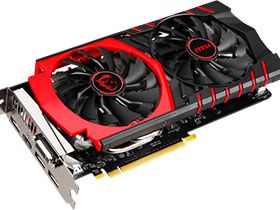 The GeForce GTX 960 is often criticized for its 128-bit memory bus and 2GB frame buffer, which is seen as insufficient for gaming in 2015. This card was designed for 1920x1080 though, so we'll have to see if FHD's demands really tax GM206's back-end.

The EVGA card is currently at one of our other labs, but we were able to compare the Asus and Zotac cards to MSI’s offering. Unfortunately, due to a lack of time with this sample, only a small selection of our benchmark suite could be run.

In Battlefield 4, the Ultra preset was no problem for each of these cards, showing that Nvidia's GM206 is perfectly capable of running this popular game at 1080p. The custom overclock we specified showed no appreciable improvement over the card's default clock rates.

Grand Theft Auto V is one of the hottest games out right now. While its settings are nowhere near topped-out in this benchmark, quality is still very good and the frame rate is perfectly smooth across our field. The 960 is certainly capable of playing this game at 1920x1080.

Also, overclocking has a noticeable effect on performance, adding an average of eight FPS.