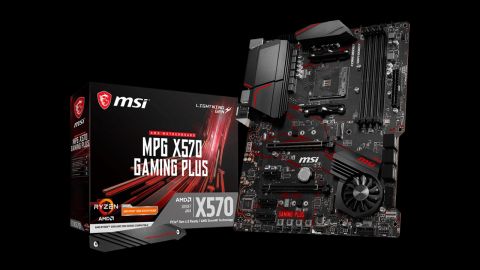 Though it appears unremarkable across most of our synthetics, the MPG X570 Gaming Plus pulled off a noticeable win in PCMark’s “Digital Content Creation.”

The MPG X570 Gaming Plus appears dead average in games. Considering it’s one of the cheapest X570 boards you can buy, that’s not a bad thing.

That all three boards offer similar performance in our various applications is a great indicator that these manufacturers aren’t cheating to win awards.

The MPG X570 Gaming Plus consumed more power at full load, and even when we retested to look for the cause we weren’t able to get it to stay consistently less than 10W above its closest rival.

Our tests dispel the popular belief that MSI has hot voltage regulators: After getting even lower readings than this from an infrared thermometer, we loaded HWinfo to make sure that the hot parts weren’t simply being hidden from our sensor. This is the highest temperature we could find at stock clocks, and it even stayed below 90 degrees Celcius through our overclocking stress tests.

Using the performance and power results from our entire X570 review series makes all three sub-$200 motherboards appear efficient, if only because some of the high-end boards needed more power for their additional controllers. Still, the MPG X570 Gaming Plus is several percent less efficient than its other sub-$200 rivals.

The MPG X570 Gaming Plus performs roughly the same as most other X570 boards, so any price-to-performance analysis will make its low price stand out.

If we instead consider its $25 savings when compared to the Tuf Gaming X570 Plus (Wi-Fi), we could just as easily say that it has around $25 less worth. You could be paying for the more-expensive board’s even-larger CPU voltage regulator and onboard Wi-Fi controller. Or, perhaps you don’t need those things?

Most buyers in the sub-$200 motherboard market will never upgrade to the Ryzen 9 3950X, and few will even jump up to the 3900X, and hardly any buyers would expect boards in this price class to overclock those processors. When you’re mostly after the basics in an X570 board, so you can spend more on the processor or other components, the MPG X570 Gaming Plus is easy to recommend.

Prev Page Software, Firmware and Overclocking
157 Comments Comment from the forums
Be In the Know