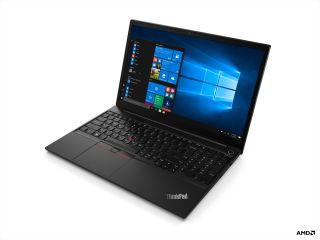 While most of these machines’ internal system specs are still under wraps, Lenovo disclosed that the E14 and E15 will support up to an AMD Ryzen 7 4700U processor with integrated graphics. Unfortunately, we still don’t know much else about the company’s AMD-powered T, X, and L ThinkPad models aside from their inclusion of Ryzen Pro 4000 series mobile processors and Lenovo’s intent to replace its existing enterprise laptops with these new lines.

However, the company was open about external design details for at least the E series. Lenovo said in a press release that the E-series features "An updated design with an improved screen to body ratio of 85%." The E series will also include a touch fingerprint reader and option to add on an IR camera at purchase. The fingerprint reader will be integrated into the power button, while the IR camera will allow users to set the laptop to lock when they step away. Buyers will also have the option to add WiFi 6 to E series laptops. These features are already present on Intel E series ThinkPads, but it’s reassuring to have confirmation they’ll carry over to the AMD models as well.

We were impressed by the Ryzen 7 4700U processor’s ability to enable strong performance at affordable prices in our reviews of the Acer Swift 3, and the prices on display here seem to fit that conception.