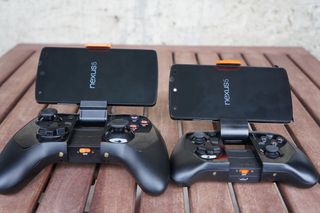 Mobile gaming has taken a new life with smartphones and tablets. While dedicated machines like the PS Vita and Nintendo 3DS still appeal to a very specific crowd, the major growth in the mobile gaming industry is on Android and iOS. Gaming accessory maker PowerA knows this well and sells a line of Moga controllers that work with Android devices.

Given how demanding mobile gaming can be on hardware, it's always been a sacrifice of having gaming-on-the-go or still being able to check your email towards the later hours of the day. PowerA believes that it's solved this issue with its updated controllers: the Moga Pro Power and its little brother, the Hero Power.

There are a bevy of improvements in the new versions, but the main raison d'etre is that the controllers can now output power directly to not only stop battery drain while gaming, but to actually charge your phone with its 5 V at 500 mAh output. The controllers can also charge when not in use, meaning that they can be your spare battery charger if you're ever in need of an emergency top up. This is accomplished with a standard USB to micro-USB cable, and two are included in the box: one that's 8-inches long for in-clip charging and another that's 3-feet long for tablet use or standalone charging.

The Moga Pro Power is the larger model and keeps much of the same design and features from the older Moga Pro controller. In terms of controller feel, the Pro Power is improved with a slightly more responsive and clicky d-pad as well as slightly stiffer triggers. The Pro Power is noticeably heavier at 251 g versus the Pro's 190 g, but the added heft actually aids in feel and balance. The added weight is attributed to the larger, 2200 mAh battery cell inside that facilitates the ability to charge a connected device.

The Moga Hero Power is the smaller of the two offerings and features more dramatic improvements over the older model. Whereas the older model felt like a watered down version of a game controller, the updated Moga Hero Power now has clickable thumbsticks and all four shoulder buttons as opposed to the older one's two-button setup. The face buttons are also much improved over the previous model, now more distinctly raised from the controller for greater travel and tactile feel. The smaller Hero Power packs an 1800 mAh battery, which is pretty decent considering it weighs a considerably lighter 155 g.

One of the major features of these controllers is that they're able to use their internal batteries to charge your phone, which basically eliminates the compromise between mobile gaming and conserving your battery life remaining. PowerA brands this functionality as Moga Boost, and states clearly that it only works while the controller has 25 percent battery life or more. This means that of the 2200 mAh in the Pro Power, only a maximum of 1650 mAh is available to charge your device; on the Hero Power, that 75 percent equates to 1350 mAh. Mind you, the battery capacity is pooled, so there may be even less available to charge the device, especially during long gaming sessions.

Once the Moga controllers hit 25 percent battery remaining, they continue to operate but will no longer output power via the extra USB port. Being power users ourselves, we'd prefer to make the choice ourselves to use the last remaining bits of juice in the Moga for charging our phones -- after all, one can simply disconnect the USB cable to stop the charge. We figure that PowerA made it function this way because the Moga is a gaming controller first and a mobile charger second. The main intention of Moga Boost is extend gaming sessions, and for that the feature works perfectly.

A Larger Clip for Bigger Phones

Both new models also have slightly improved clips that can accommodate larger devices. The older model would fully extend 3.5 inches, while the Power models open a bit wider to 3.7 inches. This means both old and new models would have no problem holding a Galaxy Note 3, but only the Power series would be able to do so while keeping the phone inside a big case like an Otterbox. We don't have the even larger phablets Galaxy Mega or Xperia Z Ultra to test fitment, but if you're the owner of either of those "phones," then we suggest only considering the Power series. Further to that point, the Pro Power may be a better bet because it also includes a tablet stand inside the box, making the overall package independently suitable even without having anything in the clip. Of course, the Hero Power will work just the same if you already have a stand for your tablet.

In terms of ergonomics, we always prefer playing games with physical controls rather than on a touchscreen (where possible), but there are still a few things left to be desired. One issue is just due to physics, and that's weight balance. The bigger the phone that's clipped into the controller, the more top-heavy it feels. The only solution to this is to make the controller portion much heavier, but then you'd be into Nvidia Shield territory, which is 588 g (we discussed this issue in our Shield review). The second issue is the clip angle, of which there's only one, forcing the user to lock his or her wrists at a specific angle to look directly at the screen. Granted, better quality displays have wider viewing angles, but regardless, we wish that there was at least one more setting so that users can choose which is more comfortable.

New for this generation is the support to play multiplayer from the same machine using multiple controllers. Each controller has an indicator light that will denote players one through four. While multiplayer gaming isn't likely from a smartphone,  they also work with tablets – and there's always the option of outputting to a TV for some couch-side gaming with your friends.

The Hero Power retails for $59.99 and the Pro Power at $79.99. Both are essentially identical in functionality, with the differences being in size and how they fit in the hand. The Pro Power is without question the more comfortable of the two, but it's far less portable – and portability is a very important factor if its to be toted around anywhere. For the more casual gamer, the Hero Power will already be a godsend to mobile gaming, but the more hardcore gamer (or anyone with large hands) will appreciate the Pro Power.