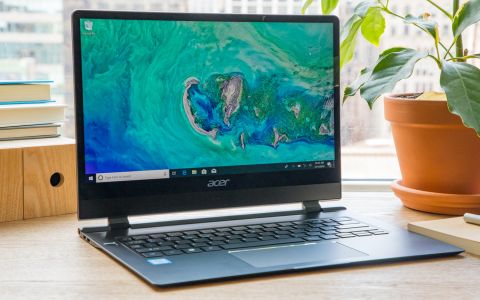 Yes, the Acer Swift 7 is the world’s thinnest laptop, and it manages good battery life. But its svelte styling comes with a last-gen CPU, a touchpad with no click, and an oddly oddly jumbled keyboard.

Acer says its Swift 7 ($1,699.99) is the thinnest laptop in the world, at less than 0.4 inches and, holding it in our hands, we don’t doubt the company’s claims. The design is incredibly impressive and almost impossibly sleek, it gets long long battery life and offers 4G LTE capability, but there are myriad trade-offs to consider.

For one, it’s so thin that you can’t click on the touchpad--it feels like an awkward dead slab of glass that takes getting used to. The keyboard is missing the function row, and actions are mapped to keys you wouldn’t expect. Lastly, the 7th-Gen Y-Series Intel Core i7 CPU is about to be replaced by 8th Gen models, and is just not as fast as we’d expect from a laptop this expensive.

Jeez, this thing is tiny. It’s tough to convey just how thin a 0.4 inch, 2.6-pound laptop is until you hold it in your hand. And the Swift 7 feels quite solid given its svelte nature. Otherwise, though, it’s unassuming. The top is black aluminum with a silver Acer logo.

The 14-inch, 1080p display on the Swift 7 is surrounded by a noticeable but inoffensive bezel. But the webcam gets plopped in an unfortunate (and unflattering) spot below the display. The deck is also black aluminum, with a chiclet keyboard and a wide touchpad that, again, doesn’t click (a concession made to the gods of thinness).

Unsurprisingly, there’s a dearth of ports on the Swift 7. To be fair, there just isn’t much room for them. You’ll find a headphone jack and two USB 3.1 Type-C ports on the left side, and the power button and a SIM card slot on the right side. If you need more ports, Acer includes a dongle in the box with a Type-C port, USB 3.1 and an HDMI output. At this price, though, we would like to have seen Thunderbolt 3 ports in lieu of regular USB Type-C.

With its 1.3GHz Intel Core i7-7Y75 CPU, 8GB of RAM and 256GB PCIe NVMe SSD, this Swift isn’t exactly a high-power machine. I had 15 tabs open in Google Chrome, including one streaming a 1080p skit from The Tonight Show Starring Jimmy Fallon, when the computer started to freeze up as I tried to move the cursor around.

On the Geekbench 4 overall performance test, the Swift 7 earned a score of 6,011, lower than the Gram, MateBook and Spectre, and well below the premium laptop average of 10,946.

The laptop took 3 minutes and 1 second to complete our Excel macro, which pairs 65,000 names and addresses. The average is 1:35, and the LG Gram and MateBook X Pro both performed outperformed the Swift on this test.

But one thing definitively proved the Swift wasn’t intended for heavy lifting: our Handbrake video editing test. While the average premium laptop completes the test in 22 minutes and 11 seconds, the Swift 7 took 42:14, far behind the competition.

The 7th-gen low-power processor is also weak on graphics. It ran the Dirt 3 benchmark at 31 fps, less than half the premium laptop average (70 fps) and far below the Huawei MateBook Pro with its Nvidia MX150 graphics (117 fps).

You might think a processor would throttle in a chassis this thin, but that’s technically not the case here. Instead, Acer opted for a low-power Y-Series CPU that’s designed to have a widely variable clock speed. The Core i7-7Y75 is rated to go up to 3.6 GHz Turbo Boost, but in our testing it only reached 3.2GHz during repeated runs of Cinebench R15. Clearly Acer is limiting the clocks to keep temperatures under control. While we certainly don’t want the laptop to overheat, that makes for less-than-ideal performance.

Acer’s 14-inch, 1920 x 1080 touchscreen display produces vivid colors and is adequately bright. When I watched the trailer for Bohemian Rhapsody, I could make out thousands of figures in a crowd. A red tie actor Rami Malek wears as Freddy Mercury popped against a black background and his skin.

The Swift’s panel measured 304 nits, just above the 302-nit category average. It’s brighter than the Spectre and on par with the Gram, but dimmer than the MateBook. But the Acer display shows off more vivid colors, covering 143 percent of the sRGB color gamut. That’s higher than the 111-percent average as well as the Spectre, MateBook and Gram.

Let’s talk about this touchpad. Specifically, it doesn’t click. The laptop’s design is too thin to make that possible, so Acer ditched the functionality. That means tapping to click through Windows. And while the 4.8 x 2.5-inch touchpad has Precision drivers for Windows 10 gestures like hiding apps by swiping four fingers down, you’ll still have to relearn some things.

For instance, to drag and drop you have to double click on the file for folder, hold on the second click, move and then click again to release. It’s not hard, but it goes against everything I’ve done in my entire life with a touchpad.

The keyboard has its own share of questionable design decisions. For starters, there’s no dedicated function row. Those actions are shared with the number keys by holding down the function button. Actions that are often assigned to the function keys, like muting the volume or adjusting the backlight have been relegated to the QWERTY line of the keyboard. Volume and brightness controls wind up on the arrow keys, which is at least more common.

Some keys have also been shrunk down or moved. The tilde key is not under the escape key, but next to the caps lock, and both are tiny. The Escape key itself is half-sized, and the backspace and delete keys are smushed together. That latter placing in particular is going to be a pain until you get used to it--if you get used to it.

With just 1 millimeter of travel and 71 grams of actuation force, it’s not a surprise that the keyboard also feels shallow. All that said, on the 10fastfingers.com typing test, I reached 104 words per minute, which is just a little lower than my usual range of around 107 - 112 wpm, with a 3 percent error rate, higher than my average 2 percent.

The two tiny speakers on the bottom of the Swift won’t fill a room. When I listened to Bruce Springsteen’s “The River” in our mid-sized conference room, I could only hear it clearly when very close to the laptop. Springsteen’s vocals and the guitars were clear enough, but the keyboards and drums were drowned out.

Acer tells me that while the RAM is soldered to the motherboard, the SSD is not. There are four Torx screws on the bottom, but we didn’t feel like we could remove the panel without breaking it. Like many other consumer electronics designed for thinness, the Swift 7 isn’t designed to let users inside to upgrade.

A laptop this portable should last all day. And the Swift 7 does, which is impressive given its size. It ran for 9 hours and 4 minutes on our battery test, which browses the web, streams video and runs graphics test on a continuous basis over Wi-Fi. The category average is 8:21, and the Acer outlasts the Spectre 13. But the LG Gram lasted a longer 10:46 and is almost as thin, and the MateBook X Pro ran for 9:55.

One of the benefits of a fanless design is that the Swift produces very little heat. After streaming 15 minutes of HD video from YouTube, the laptop measured 84 degrees Fahrenheit on the bottom, 80 degrees between the G and H keys and 79 degrees on the touchpad. That’s all below the 95 degrees we typically consider comfortable for a notebook like this.

The Acer Swift 7 joins a slowly growing rank of consumer-focused machines with LTE enabled. There’s a nano-SIM card tray on the right side of the laptop, as well as an eSIM inside. Acer includes a 1GB free trial (for the first month of use) on Transatel, which let me use the Swift 7 without taking my SIM card out of my phone. You can also buy cellular service through Windows 10.

The 720p webcam on the Swift 7 would be solid, if only it weren’t located under the screen. While its colors are accurate (it caught both of the blue hues in my striped shirt, as well as the blues of my eyes), the fact that it’s located so low makes photos and video conferences unflattering.

Acer thankfully went light on the preinstalled software this time around. There’s Quick Access, which lets you control the Bluelight Shield for working at night and a Color Intelligence mode that highlights the colors on the screen, as well as options for LTE and the embedded eSIM.

The Acer Care Center shows you system information, lets you update the PC and make backups. Only the Acer Collection, which is a store for apps, seems gratuitous.

Acer sells the Swift 7 with a one-year warranty.

You have to hand it to Acer. It made a laptop so thin that it seems impossible, and one with more than 9 hours of battery life, an impressive touchscreen and 4G LTE. But at $1,699, the Core i7 Y series processor just isn’t enough power, and the click-free touchpad and odd keyboard will require users to re-learn some fundamentals of interacting with a computer.

Unless you need the thinnest notebook on the market, there are other great options in this price range. Huawei’s MateBook X Pro is heavier and thicker, but you still get a gorgeous design and display and longer battery life. It’s worth the extra weight. (The Matebook X Pro also starts at $1,199.)

That means the Swift 7 is for a niche group: those who need the smallest, thinnest 14-inch laptop available. For some, those space savings are worth it. But most would be better off with a little more bulk in exchange for a better keyboard and touchpad.