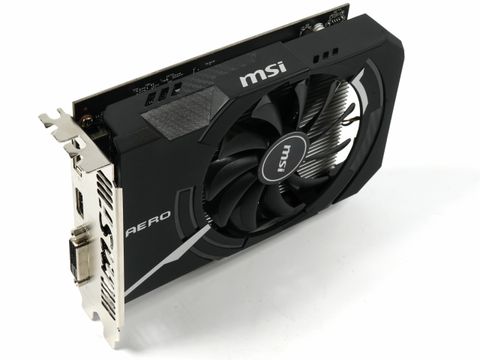 AMD couldn’t provide us with its own reference design, so we’re using a model from MSI for our review. The RX 550 Aero ITX 2GB comes overclocked to 1203 MHz from the factory, though its memory frequency shares the 1750 MHz base spec.

There’s no semi-passive fan mode. Instead, MSI prioritizes simplicity, safety, and, of course, price for its entry-level model.

The slight GPU overclock shouldn’t make an appreciable difference to performance, especially since we’re not sure if MSI's RX 550 Aero ITX 2GB can sustain its boost clock rate in light of AMD's power limit.

Weighing just 282g, the RX 550 Aero ITX 2GB is a very light card. It’s also compact at 15.5cm long, 10.5cm tall, and 3.5cm wide. Those dimensions occupy exactly two expansion slots, and the lack of a backplate means you don't have to worry about compatibility issues with other components.

The fan shroud is made of plastic, though MSI did put some effort into the injection molding. Its rough surface feels and looks nice, while other aesthetic touches add character. Those metal-looking elements are actually matte silver lacquer imprinted on the surface, though.

The top of MSI's RX 550 Aero ITX 2GB features the company logo, and of course there is no power connector.

Underneath, the bottom is fairly boring. No big deal, you'll never look down there post-installation, anyway.

The front and back of the card are fairly free-flowing. This is beneficial in light of the horizontally-oriented cooling fins.

MSI adds a total of three display outputs to the slot bracket: one dual-link DVI port, one HDMI 2.0 interface, and a DisplayPort connector.

It’s easy to nail the layout on such a small graphics card, and MSI's RX 550 Aero ITX 2GB is no exception. A simple, tidy design gives us nothing to complain (or get excited) about.

The RX 550 Aero ITX 2GB's memory is supplied by Elpida (now Micron). Four W4032BABG-70-F modules offer 4Gb density (16x 256Mb) with a maximum clock rate of 1750 MHz. They're the same ones we found on AMD's Radeon RX 570. These particular ICs don’t have a lot of overclocking headroom, especially since they aren’t actively cooled. In the past, they didn't deal well with temperatures beyond their rated specifications.

The GPU’s voltage supply is almost overkill with its three phases supplied by a Richtek RT3662AC dual-output PWM controller. This chip is an interesting choice, since you'd expect to find it on a laptop motherboard rather than a graphics card. It does simplify the card’s design, though, with its three embedded MOSFET drivers.

Capped ferrite coils are used for both the GPU and memory voltage converters. They stand on end, since their height doesn’t really make a difference.

The memory’s voltage supply is realized through uPI Semiconductor's small uP1529, which controls the single phase consisting of another MagnaChip MDU1514 and MDU1517 pair.

There’s not a whole lot to say about MSI's cooler. It's made of extruded aluminum and weighs 120g. The fan’s diameter and 11 blades put it on the noisy side, but we’ve certainly heard worse.