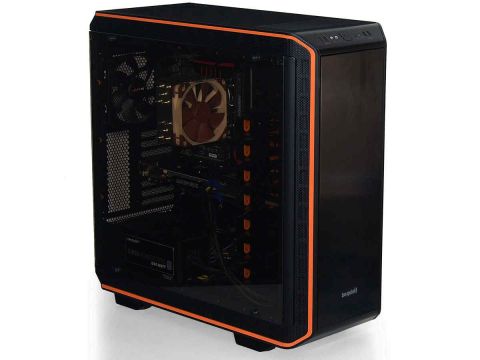 The Dark Base Pro 900 delivers astounding modularity for the high-end enthusiast. If you want complete control over the configuration of your build, consider this chassis. The water cooling support provides vast options. Even with good performance, it's hard to justify the $250 price for this pro version. Buyers who want neither the glass nor the charger will find better value in the non-pro Dark Base 900, which is priced at $200.

German PSU, cooling and case manufacturer be quiet! has won numerous awards including Manufacturer of the Year nine times in a row from the German PC Games Hardware magazine. Its Base chassis product line is joined by new high end cases, which include the feature-packed Dark Base Pro 900.

Black anodized aluminum encases a steel frame, with orange accents between the beveled edges and circuit cooling system contrasting the sleek design. From E-ATX to Mini-ITX, this case can fit it all. It’s worth noting that anywhere the case has the brushed aluminum panels, fingerprints are sure to be found.

The front panel features two USB 3.0 and two USB 2.0 ports. Headphone and microphone jacks are also present, along with power and reset buttons. The power button and HDD light on the front glow orange, matching the edge accents of the case. The logo is presented towards the bottom.

On the back, there are hexagon-pattern air holes with a single 140mm fan on top. The case features eight expansion slots.

The motherboard side panel has a concealable fan mount that hosts two 120mm fan slots. There are some space concerns here. If you choose to occupy both fan mounts, they may interfere with cable management space. You could, however, only open the cover partially to allow for extra air intake.

Since this is the pro version of the case, only this side panel is secured with thumb screws that resist full detachment from the panel. You can however, switch which side each panel is on to correspond with the direction of motherboard tray placement (upside down on the left, or traditionally on the right).

Beautiful, tinted, tempered glass covers the other side of the enclosure. It is secured by 4 thumb screws in each corner. Caution is advised when removing this pane of glass since not much is supporting the bottom once the screws come off. The Pro version of the case is differentiated by the tempered glass panel, two LED strips and a Qi charger, and runs $50 more than the standard Dark Base 900 model.

The bottom of the case has no ventilation, but there are two internal fan mounts that draw air from between two panels. The case is raised from the surface it’s on by four feet, with great quality rubber grommets on the bottom. The rubber has a small total surface area, though a great grip.

The top of the case has some exhaust vents towards the back and a built in Qi charger towards the front. If you have a higher end smart phone that supports wireless charging then this will be a very convenient feature. The top panel is difficult to remove, requiring some coordination to unlock the eight clips that secure it.

Outside edges feature a circuit ventilation system with L shaped passages that prevent internal component noise from traveling in a straight line out of the case.