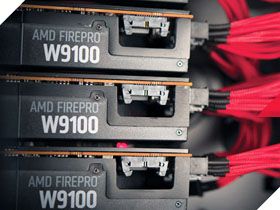 For the first time since 2007, AMD has a FirePro-branded card based on a really big GPU. At 6.2 billion transistors, the Hawaii processor boasts 44-percent more logic than the FirePro W9000’s Tahiti chip. They're both manufactured at 28 nm, though.

How else are the previous flagship and AMD's more recent introduction similar? Glad you asked!

First, let's compare the technical specs of two Nvidia Quadro cards to AMD's FirePro W9100. Hopefully that'll give us some basis for a performance expectation. While the AMD flagship's $4000 suggested retail price is higher than the Quadro K5000, it's still shy of the Quadro K6000. So, we'll put the FirePro in the middle of the following chart.

When you have performance to offer, new opportunities present themselves. AMD identifies CAD and engineering, media and entertainment, medicine, and finance as some of its more traditional strong points. But with its big Hawaii GPU and the GCN architecture's alacrity in compute-intensive tasks, the company wants to lock down its share of the virtualization, cloud gaming, and signage segments as well.

The ambition makes sense. Workstation-oriented apps benefit more and more from the performance of modern GPUs, after all. Nowadays you can even run multiple CAD and CAE workflows at the same time. Cranking along on the next version of a drawing while rendering the previous one isn't a pipe dream. This stuff is actually doable. And the sky's the limit with a design equally adept in 3D- and general-purpose tasks.

AMD is already a seasoned vet when it comes to 3D. Now GPGPU is where it's trying to lead development. In order to better facilitate that initiative, the company is throwing its support behind the OpenCL standard as an alternative to Stream and CUDA. As we've seen in several different applications already, when there's a computationally difficult job that can be parallelized, the potential performance gains are well worth optimizing for.

There's also a notable trend toward the adoption of 4K (3840x2160) in the workplace. Those higher resolutions give engineers and artists a lot more room to work with. And while more detail obviously benefits 3D applications, even 2D tasks like programming are greatly enhanced by the extra screen space and pixel density of a 4K display.

Similarly, professional media-oriented titles see a lot of benefit as it becomes possible to edit high-res video in real time at full resolution. A workstation board like the W9100 should speed up the processing of video and photo filters, along with accelerating encoding/decoding.

The workstation graphics card market is clearly changing, and the lines between various segments are getting blurrier, even as the workloads and data sets are more specific than ever. CAD, CAE, M&E, oil and gas...the FirePro W9100 is AMD’s most recent effort to grab a larger share of all of them. But enough background. Let's put this card through its paces.