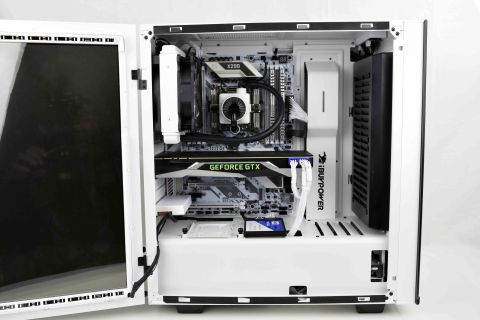 The iBuypower Snowblind Element Extreme faces off against our Z270 test bed, which sports a quad-core i7-7700K on an AsRock Z270 Gaming i7 motherboard with a 16GB (2 x 16GB) kit of Kingston HyperX DDR4-2133. We loaded it with a GeForce GTX 1080 Ti 11GB GDDR5X Founder’s Edition graphics card and powered it all with an EVGA Supernova 1000 G3 PSU. You can see the full specs for our test rig below.

We also compared the Snowblind Extreme to the recently-reviewed Corsair One Elite, which sports an 8th generation Z370 platform with a six-core i7-8700K processor, 16GB of DDR4-2666, and a GeForce GTX 1080 Ti. Although the form factor and cooling are significantly different, the two PCs both offer six-core processors and GTX 1080 Ti graphics, and it will be interesting to see how the Snowblind’s X299 platform competes with the top end CPU of the Z370 chipset (in both price and performance).

The iBuypower Snowblind Extreme in our lab wasn’t overclocked (although it can be, at a price), so we should expect normal base and max Turbo Boost frequencies (3.5GHz base, 4.0 GHz boost) from the Core i7-7800X, and similar baseline GTX 1080 Ti performance as the competing systems. However, the quad-channel DDR4-3000 memory should provide excellent performance in bandwidth-intensive applications, especially over the systems with dual-channel memory setups.

We tested the Snowblind with the side-panel transparent LCD display set to the normal windows extended desktop. We noticed performance loss in games when running Wallpaper Engine with a graphically demanding animation (which can range from light to heavy workloads), but we didn’t want to completely leave out the impact such a feature would have on the average user (who wouldn’t be bothered unplugging the side panel before gaming).

Leaving it on with the desktop still demonstrably reduced GPU performance (we confirmed this with a few runs of 3DMark with the screen connected and disconnected), and we feel that leaving it on without running a heavy animation represents a more realistic load on the system for potential buyers.

The iBuypower Snowblind Element Extreme starts our test suite with a mixed bag of results. It manages higher Physics (CPU) performance against our i7-7700K test rig in the Fire Strike and Time Spy benchmarks. However, the Corsair One’s speedier i7-8700K matches the Snowblind’s -7800X core count and easily outperforms the X299 counterpart with its higher clock rate, producing a higher Physics and CPU score. We observed the Snowblind reaching 4.0GHz in the tests with all the cores engaged,

The GPU inside the Snowblind is clocked identically to the competition in the field, and it is saddled by the side-panel display, which syphons some of the GPU’s resources in order to function. We ran our tests without any special background or animations running (just the desktop), but it still appears to take away some horsepower from the GPU in these synthetic benchmarks.

The battle of six-cores continues with the Cinebench R15 tests, which again place the Snowblind behind the Corsair One and our Z270 test bench. We aren’t surprised to see it fall behind the Core i7-7700K and -8700K processors in single-threaded rendering (those CPUs have much higher single-core Turbo frequencies), but it still can’t beat out the One’s six-core CPU with higher all-core clockrates in the multi-threaded tests (the -8700K operates at 4.3GHz, the -7800X reaches 4.0GHz). It’s also no surprise to see the X299 platform trailing the pack in the OpenGL portion of the test.

Similar to Cinebench, the synthetic workloads of the Compubench tests put the Snowblind behind the other systems in the field, with iBuypower’s X299 offering falling short of the next competing PC by roughly 20 FPS. This is again due to the difference in CPU clock rates. However, the Bitcoin Mining tests still put the GPU performance of the One in the same ballpark as its competitors, despite the hampered potential from the side-panel display.

The 500GB WD Blue 2.5” SATA SSD inside of the Snowblind is a sturdy base for a primary storage drive, with enough capacity for a handful of your favorite AAA games. It performs on par with our Z270 test rig’s SATA SSD with sequential read speeds (around 550 MB/s), but it falls behind by almost 100 MB/s in sequential write performance. The drive’s 4K random read and write performance is not as spectacular at QD2, coming in at roughly 1/3 of the read performance (around 25K IOPs) and about 9K IOPs less than our reference machine. The One’s PCIe NVMe storage outclasses the other systems and provides speeds above the SATA 6 Gb/s bandwidth cap.

The X299 platform inside the Snowblind Extreme finally finds a place to shine in our Sandra Memory Bandwidth tests. The quad-channel memory controller doesn’t fare well against the dual-channel systems in single-threaded tests, but multi-threaded bandwidth performance nearly doubles that of the next competing system. Programs that rely on memory bandwidth will see impressive gains with the Snowblind Extreme’s X299 setup.

The Snowblind’s slower CPU clock rate and storage performance is on display again in the PCMark 8 application tests, which use Microsoft Office and Adobe Create Suite applications with synthetic workloads. The PCMark 10 Extended tests (which are entirely synthetic) follow suit, with the Snowblind falling considerably high in the various targeted workloads, including Gaming.

The iBuypower Snowblind finishes the productivity and synthetic benchmarks in the same place it started – at the back of the line. The X299 platform’s gaming performance is not as adept as the faster-clocked Z270 and Z370 machines we compared it to (although it comes extremely close in the Orange Room test), and we have also seen evidence that the secondary side-panel screen is stunting GPU performance in games. However, it doesn’t significantly impact the scores in this particular benchmark, and performance between all the systems is within a few FPS of each other.