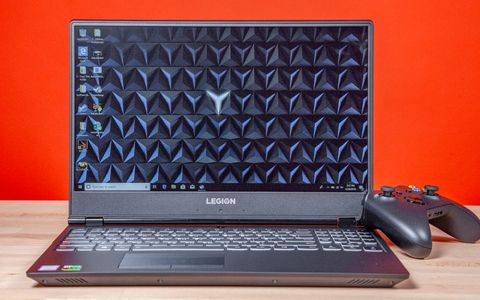 The Lenovo Legion is a gaming laptop with looks for adults, but its soft keyboard and dull display are disappointing.

Finally, a gaming laptop for adults. The Lenovo Legion Y530 ($749.99 to start, $949.99 as tested), isn’t the most extravagant machine. It doesn’t scream “gamer,” but with its Nvidia GeForce GTX 1050 Ti, it can still play most games at decent settings. And while it offers solid performance and no bloatware, you may be taken aback by its display, which doesn’t offer the same vivid colors as some competitors, and its spongy, soft keyboard. It all depends how much you’re willing to give up for looks.

Lenovo made the Legion so much classier than it’s ever been before. While its old gaming notebooks were hulks with aggressive angles and red backlighting, the Y530 is refined. You can be respected while using this laptop in public. The Y530 is a sleek, black aluminum affair that looks just as good in a Starbucks as it does connected to an RGB gaming mouse and external monitor. The lid is spartan, except for the Legion branding imprinted on the left side, with a small, light-up Y- ogo in the “O.”

Inside, the laptop has a minimal bezel on the top, left and right. Lenovo has moved the webcam below the screen, which unfortunately means it will only show you at the least flattering angles. The deck has a comfortable soft-touch coating, and the keyboard has subtle white backlighting.

The laptop has a bit of a booty. Specifically, there’s a piece that juts out behind the rear of the system with a set of ports. It’s where you’ll find a lock slot, power jack, Ethernet port, HDMI output, Mini DisplayPort, USB Type-C and a USB 3.1 Type-A port. There’s a Type-A port on either side of the laptop, as well as a headphone jack on the left side.

With an Nvidia GeForce GTX 1050 Ti with 4GB of VRAM, the Legion can play most new titles, albeit probably not at their highest settings. When I played Middle-earth: Shadow of War at 1080p on high settings, the game ran between 45 and 50 frames per second. Reducing the settings down to medium got me between 54 and 63 fps, even as I fought a monstrous Graug.

On our budget gaming test, which runs the Rise of the Tomb Raider benchmark at high settings with SMAA anti-aliasing, the Legion ran the game at 40 fps, which is about on par with the category average and a barely-perceptible 8 percent slower than the the Omen (GTX 1050 Ti 4GB). Due to its lesser video card the GL62M (GTX 1050 2GB) stuttered along at an unplayable 28 fps.

Our review configuration of the Legion boasts an Intel Core i5-8300H CPU, 8GB of RAM, a 128GB PCIe SSD and a 1TB, 5,400-rpm HDD. That doesn’t make it a powerhouse, but it can handle most average workloads without an issue. It had 30 tabs open in Google Chrome, including one streaming a 1080p episode of “Last Week Tonight with John Oliver” without a hint of lag.

It took the Legion 44 seconds to copy 4.97GB of mixed media files, which translates to a rate of 115MBps. That’s slower than average (195.6MBps) and the GL62M , but speedier than the Omen and Nitro.

On our Excel macro test, the Legion paired 65,000 names and addresses in 57 seconds, which is 10 seconds faster than average, comfortably quicker than the Nitro and a few seconds better than the GL62M.

When it came to our Handbrake video editing test, the Legion transcoded a 4K video to 1080p in 14 minutes and 12 seconds, coming out ahead of the averageand the Nitro 5 Spin . The GL62M (14:11) finished just one second ahead of the Legion.

The 15.6-inch, 1920 x 1080 display on the Legion isn’t as colorful as I’d like and could stand to be a smidge brighter. When I watched an FHD trailer for Creed II, I could see Sylvester Stallone’s wrinkles even in dark scenes, and Michael B. Jordan’s red gloves and training robe popped against the gray walls of a gym. I would have liked to turn up the brightness, but it was usable despite that. When I played Middle-earth: Shadow of War, I could make out all of the wrinkles in a Graug’s skin, and while some areas got a little too dark, I was always able to see important details.

The Legion’s screen covers 80 percent of the sRGB color gamut, falling short of the entry-level gaming average of 91 percent. The Omen is less vivid, but the GL62M and Nitro 5 Spin are both better at showing off their hues.

Lenovo’s panel outputs an average 266 nits, surpassing the 255-nit average, the GL62M and HP Omen. The Nitro 5 Spin was the brightest of the bunch at 296 nits.

The Legion’s island-style keyboard is spongy and soft. There’s a little bit of give in the frame, and I didn’t get a tactile click when I used it. You get deep key travel at 2 millimeters, and it requires 63 grams of force to quick. On the 10fastfingers.com typing test, I hit 106 words per minute, which is a little slower than usual for me, but with my standard 2 percent error rate.

The 3.9 x 2-inch touchpad is on the small side, and I would have definitely preferred a bit more vertical space. It uses Windows 10 precision drivers and easily responds to gestures with up to four fingers, like opening task view with a swipe up. The right and left click buttons are responsive and easy to press.

The speakers on the Legion are serviceable, but not excellent, which is generally par for the course for laptops. When I listened to The Weeknd and Kendrick Lamar’s “Pray for Me,” the vocals and synths were clear, as were the keys. But the drum beat wasn’t as powerful as I expected. When I tried opening the Dolby Audio app to make some changes, I found that it didn’t make much of a difference.

When I played Middle-earth: Shadow of War, I could hear enemies’ talking and the swords clanking, but more subtle sounds like Talion’s footsteps weren’t as noticeable.

I hope you’re adept with a screwdriver because you’ll need one to get inside the Legion. To get the base cover off, there are 11 screws in two different lengths. Most of those are in recessed alcoves, so you’ll need to flip the unit over if your screwdriver doesn’t have a magnetized tip. The screws have a bit of glue on them, so I had to put in a bit of elbow grease. Then you have to dig your nails or a spudger in and pull the bottom of the case off.

The HDD and its caddy are immediately available, as was the M.2 SSD, which was beneath a protective material. The SSD is small — much shorter than most NVMes we see. But there’s a bracket that, if you remove it, should allow a full size M.2 SSD.

The RAM is underneath a shield in the center of the laptop. The maintenance manual says you can “carefully remove it,” but several TH staffers got worried when trying to get it off. But if you need more memory, consider that an extra difficult part of this upgrade.

Just because the Legion is portable that doesn’t mean it has the endurance to go very far. The 52.5 Wh, 3-cell battery endured for only 4 hours and 44 minutes on our battery test, which continuously browses websites, videos and graphics benchmarks at 150 nits. The entry-level gaming average is slightly higher (4:52). The GL62M ran for a shorter period of time (3:33), while the Nitro 5 Spin outperformed (7:08).

The Legion stays comfortable during normal workloads but heats up while gaming. After streaming 15 minutes of HD video from YouTube, the Legion measured 97 degrees Fahrenheit on the bottom, 90 degrees between the G and H keys and 82 degrees on the touchpad.

While I played Shadow of War, the keyboard climbed to 97 degrees and the bottom reached 124 degrees.

The thin bezels on the Legion required Lenovo to move its 720p webcam to the bottom bezel. It’s sharp and color-accurate, but that placement just isn’t flattering unless you want someone you’re Skyping with to have a good view up your neck. While a navy shirt I was wearing was the same hue in a photo I took at my desk as it was in real life, that doesn’t change the fact that the top of my head was cut off and you could practically see up my nostrils.

Lenovo doesn’t put too much software on its machines. The primary app is Vantage, which Lenovo has given a bit of a gaming edge to. It puts the focus on CPU, GPU, RAM and storage. It also provides a shortcut for a cooler booster to run the fans harder. Additionally, it runs system scans and allows you to change hardware settings.

Lenovo sells the Legion Y530 with a 1-year warranty.

As far as gaming laptops go, the Lenovo Legion Y530 is downright classy. But refined looks aren’t everything, and in the Legion’s case, there are drawbacks. Solid performance is marred by a spongy keyboard and a display that isn’t as colorful as competitors. It’s also a bit of a pain to upgrade (especially the RAM).

For a better display and keyboard, you can get the Acer Nitro 5 Spin for $1,000, but you’ll give up some power, as it uses a lesser Nvidia GeForce GTX 1050 GPU. And if you’re the type who likes a 2-in-1, you’ll get a bit of extra flexibility.

But if you want a gaming notebook with good looks and solid performance and are willing to give up having an amazing display, the Legion Y530 will be a chic part of your battle station.