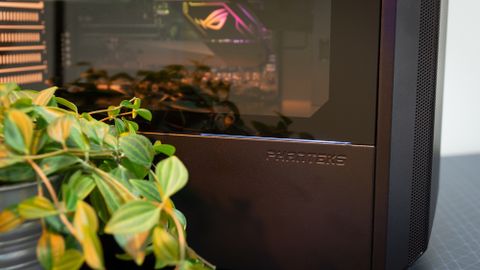 If the Phanteks Eclipse P300A had a motto, it would be "less is more." It succeeds at what it aims to do well and is an excellent choice for a beginner builder. It's a simple, minimalist budget chassis at a nice price.

Dutch case, cooling, and PSU manufacturer Phanteks offers up the Eclipse P300A, an airflow-optimized variant of the P300, ditching the RGB lighting and adding a front mesh intake. This new front facade should do the case some favors in terms of temperatures, but the chassis only comes with one fan included, and that isn’t much.

But the basic setup also means the price is low; you can buy yourself the Phanteks P300A for just $60, which might just make you forgive it for its lack of included extras. At this price, the company is targeting the entry-level builder who wants an ATX chassis that cools well and isn’t overly designed or flashy. There’s a lot to like here, but will the P300A make it to our best PC cases list? First, let’s take a close look at the Eclipse P300A’s specs.

When unpacking the Phanteks P300A, it’s clear you’re dealing with a very basic chassis with hardly any features that you don’t strictly need. The tempered glass side panel is the primary aesthetically focused feature. There is no RGB lighting, but you’ll find a subtle white line that lights up at the bottom right of the glass panel that looks quite neat.

In terms of size, the P300A is about as compact as an ATX chassis gets. Gone are the days where we need 5.25-inch external bays and tons of hard drives. This chassis stands out by being one of the smallest “normal” ATX mid-towers around.

At the top of the chassis is a magnetic mesh panel to hide the screws to attach a fan. It’s a nice touch, but it slides out of place easily and doesn’t fall into its cavity as nicely as in other cases. Both the right side/back panel and the tempered-glass panel feature thumbscrews at the rear and slide off the chassis for removal. Most glass panels come with thumbscrews on the side to secure them, but despite being a budget case, Phanteks has opted for a sliding mechanism here. This is less finicky in use and results in a flush side profile, adding to the minimalist appeal.

The front I/O resides at the front of the top of the chassis, consisting of two USB 3.0 ports, separate mic and headphone jacks, along with power and reset buttons. There is no USB Type-C here, but this is just a $60 case, and front-panel USB-C headers are still somewhat rare-especially on the kind of budget boards you’re likely to pair with a case that’s this affordable.

Internally, the Phanteks P300A is simple. In the main motherboard compartment you’ll find space for the motherboard, graphics card, and associated cooling components and no more.

Underneath the power supply shroud is space for the PSU as well as two 3.5-inch drives. The case also supports two more 2.5-inch drives behind the motherboard tray. But a bracket for just one drive is included in the box.

For cooling, the chassis comes with one 1200 RPM fan that uses voltage control for regulation (3-pin). This is a simple budget fan for a budget case, but it seems to perform adequately as we found in our testing. Still, for most builds you’ll probably want to add at least one more spinner.

Phanteks opted to include only an air filter at the bottom of the chassis for the PSU intake, explaining that the front mesh is so fine that it acts as a filter. This should, in theory, reduce intake drag and therefore improve temperatures, though with all the gaps around the chassis, we would still expect some dust buildup. The front panel comes off easily without much force for cleaning and accessing the fan mounts and HDD caddy.