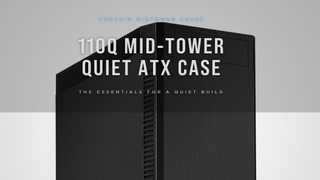 High-end and complex hardware can certainly be exciting, but sometimes there’s something to be said for simpler hardware, with less stuff that you don’t need. That appears to be Corsair’s strategy with its new Carbide 110Q chassis.

The 110Q is almost identical to the existing 110R, except that it is the quiet variant with a closed side panel, and four of its panels come with sound-dampening materials on the inside to keep noise at bay. The Carbide 110R is a little flashier, but still subtle with a tinted 4mm-thick tempered glass panel on the left. This variant lacks the sound-dampening material. Both cases also come with dust filters.

The Carbide 110Q can house up to an ATX motherboard with seven expansion slots, two 3.5” hard drives and two 2.5” drives, and one optical drive bay. We’re a little perplexed about why optical drives are still an option in 2019 – we would rather see a seamless front panel, but nevertheless, it’s there. Front I/O connectivity is handled by a power button, two USB 3.1 Type-A connections, a combined headphone/microphone jack, and a reset switch.

CPU coolers up to 160mm tall are supported, along with GPUs up to 330mm in length. PSUs can be up to 180mm long. The 110Q loses the PSU cover from the 110R (which you don’t need anyway without a glass panel) but keeps the ample room behind the motherboard tray for cable management.

For cooling, the Carbide 110Q can house a 120mm fan (included) at the rear, along with support for either three 120mm fans or two 140mm fans at the front for intake. The 110R with tempered glass also has a top-cover vent, where you can mount either a 120mm or 140mm fan, whereas this new quiet version has a closed top panel that doesn’t allow air (and thus noise) to escape – pretty good attention to detail, as we often see manufacturers release their quiet case with the same open-top panel as the performance-oriented version, likely due to cost-cutting in manufacturing.

The Corsair Carbide 110Q will be available in 1-2 weeks with an MSRP of $69.99, the same price as its tempered glass brother. With this being the MSRP price point, we’ll likely see slightly lower street prices a few weeks from now – and if you can score this case for about $60 when you’re buying yourself a PC, it looks like you’ll have quite a good deal. This case looks to be especially suitable for beginning PC builders who don’t want to spend too much and keep things simple, but can also cater to experienced builders who simply don’t need anything more.