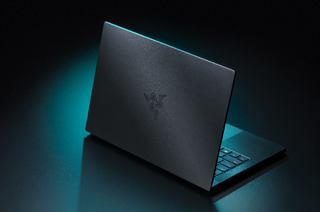 Razer is announcing its latest update to its Razer Blade Stealth 13 ultrabook today, which brings Intel's new 10th gen CPUs to the thin and light gaming line, along with a new dedicated GPU and two different display options, including the smallest 120Hz display on a laptop yet.

2020's update on the Razer Blade Stealth 13 comes in two models, one geared for 1080p@120Hz speed and one for 4K@60Hz fidelity. Aside from the difference in display, however, both models share identical specs and visual designs, although the 4K model is slightly heavier and features touch input.

Equipped with Nvidia's new GeForce GTX 1650 Ti Max-Q, the most immediately noticeable upgrade to the new Blade Stealth 13 is dedicated graphics, as opposed to last year's Intel Iris Plus integrated graphics. This year's refresh also updates the CPU to Intel's latest 10th Gen silicon, specifically the Core i7-1065G7, and backs that up with 16GB of memory and a 512GB NVMe SSD on all models.

The other major upgrades are to the two new display options. The Blade Stealth 13's new GTX 120Hz model, for example, offers what Razer claims is the "world's fastest 13.3-inch display," beating out its competitors in bringing 120 fps gaming to such a small form factor. Alternatively, the GTX 4K model looks to bring in creators with a 100% sRGB color accurate 4K touch display, a first for the line. Of course, actually being able to play most modern games anywhere near the limits of either of those two screen options with the modest 1650 Ti graphics is another matter entirely.

Design-wise, the Razer Blade Stealth 13 comes in a minimal black thin-and-light form factor, with no noticeable texturing or design work aside from the Razer logo on the back. Flipping the laptop open, however, does reveal an RGB keyboard.

Pricing starts at $1799.99 for the GTX 120Hz and 1999.99 for the GTX 4K, with both models launching today on the Razer website and through select US and Canadian retailers. Retailers in other regions are set to carry the refresh "soon."